Spiralling staircases connect stalls on different levels inside this concrete market building as well as creating a route between two districts in the Portuguese town of Abrantes (+ slideshow).

The Abrantes Municipal Market was designed by Lisbon studio ARX Portugal to provide several storeys of stalls for local businesses and to act as a thoroughfare linking two distinct parts of the town.

The building replaces the derelict workshops of the local bus company. It is squeezed onto a narrow plot flanked on its lower side by the town's tribunal court, and at its highest point by a street leading towards the old town.

It will eventually also provide a link to a former convent that architect João Luís Carrilho da Graça is converting into a museum. 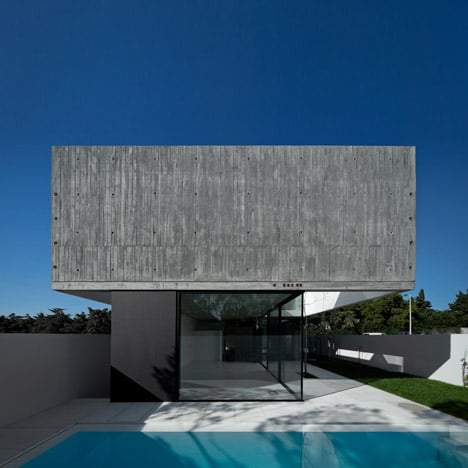 House in Juso by ARX Portugal and Stefano Riva

"The programme stated the importance of connecting these two streets, thus creating an upwards route to the Iberian Museum of Archeology and Art, intended to be built in the São Domingos Convent at the highest city level," the architects said.

The market is situated between typical residential properties built in different periods and styles. Its compilation of concrete boxes creates a distinctly modern presence on the street, configured to respect the height of its neighbours. The design follows a trend for buildings comprising regular volumes that are stacked askew to create more unusual forms.

Rather than leaving the concrete exposed, ARX also chose to paint the building white, making it stand out even further. This marks a departure from previous projects including the raw concrete of 2012's House in Juso and 2013's Caneças High School.

The need to provide a straightforward route between the two streets at different levels led to the integration of a staircase that runs along one edge of the building.

A narrow volume extending along the roof above this staircase is clad on its north-facing side with translucent glass, allowing natural light to penetrate the interior.

The stairs emerge next to a projecting box that houses a visitor centre at the side facing the public square. The staircase is lined on one side with market stalls, creating a sense of continuity with the existing urban fabric.

"The new Abrantes Market is at once building and street," explained the architects. "One can cut across, going from one street to the other, either through the stairway opened at the northern edge, or wandering between the stands and the spiral staircase located at the southern edge."

An entrance on the upper level is framed by angled walls. Inside the market, a series of undulating walkways pass by the stalls and connect with the spiralling stairs at one end.

The wavy concourses extend out over the atrium to provide points where visitors can stop to rest and chat. A small rippling balcony on the level of the street leans over the full-height staircase void at the side of the building.