Czech studio Chybik + Kristof has completed a pop-up marketplace in Prague with a modular structure of pastel-blue scaffolding that can be easily modified or relocated.

Located in the city's Andel district, the project is the third in a series of temporary food markets in Prague designed for the hospitality brand Manifesto Market.

It was built by reusing and adapting materials from the previous iteration in Smichov, which was also designed by Chybik + Kristof.

Each of these markets has aimed to reinvigorate a neglected site with new activity.

The Andel market sits in an "under-utilised gap" alongside a carpark in the district's shopping, business and entertainment area. It comprises 13 restaurants, two bars and a culture zone with a stage.

Raised on wooden decking that conceals its technical services, the structure's blue scaffolding supports a series of corrugated metal kiosks organised around small courtyards, seating and a shallow pool.

The scaffolding also incorporates lights, signage and speakers, while doubling as an elevated terrace overlooking the market below.

Simple cut-outs create serving hatches in the metal kiosks, and purple and neon tube lights attached to the scaffolding activate the courtyard spaces at night.

"Each of the courtyards, characterised by unique components such as furniture, lighting, and greenery, provides meaningful experiences for visitors and the local community," explained the studio.

"In the heart of the market, the scaffolding serves as a terrace that floats above the containers, overlooking the vibrant event spaces of the lower levels." 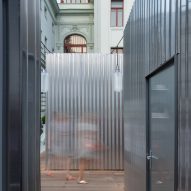 To limit the environmental impact of the project, it is powered by renewable energy and designed to be reversible. Its scaffolding can be easily disassembled and adapted to future sites once the Andel market closes.

"Manifesto Andel is an example of reversible design, and the philosophy of reuse is crucial to its concept," said the studio.

"The market operates the whole year and is powered by clean energy from renewable sources. The modular concept makes it compatible with various spaces, allowing for its reuse in future locations," it added.

Alongside the previous Manifesto Market in Smichov, Chybik + Kristof's other recent projects include the redesign of a brutalist bus terminal in Brno and an undulating concrete building for wine producer Lahofer.

The studio also recently revealed designs for what will be the tallest skyscraper in the Czech Republic, the Ostrava Tower.

The photography is by Studio Flusser unless stated otherwise.