Studio Libeskind has won planning permission to build a 105-metre-high pointed skyscraper in the centre of Jerusalem – set to become the city's second-tallest building.

Called the Pyramid Tower, the 26-storey, mixed-use building will be constructed next to the Mahane Yehuda market – commonly called "The Shuk" – in the centre of the Israeli city.

With a height of 105 metres, it will be just 16 metres shorter than the city's tallest building – the 121-metre-high Holyland Tower 1.

Designed in conjunction with local architect Yigal Levi, the tower will contain 200 luxury apartments, a boutique hotel, and a rooftop restaurant and observatory that will offer sweeping views.

The tower's tapered form will create open space around the structure and enables natural light to reach ground-level spaces, said architect Daniel Libeskind, who was born in Poland and is based in New York.

Libeskind is well known for his expressive and often angular architecture. Recent completed projects include a convention centre in the Beligan city of Mons and housing complex in Milan designed with Zaha Hadid.

A guiding force during the design process for the Pyramid Tower was the site's historic context, said Libeskind. 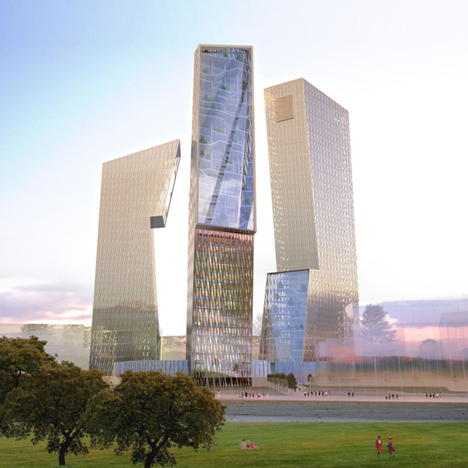 "The Pyramid mediates between ancient traditions and myths, while providing a 21st century reinterpretation of that great form," he said."The design complements the context and gives the neighbourhood a vibrant public space in the heart of the ancient city."

The building's facade will feature a geometric pattern made of Jerusalem stone and glass – a fusion of vernacular and modern design, according to the firm.

"The pattern and relief of the facade refers to traditional, local typologies while also fulfilling contemporary functions," said the firm.

The 35,000-square-metre project also features a public plaza at ground level. An arched colonnade will connect the plaza to a shopping arcade.

"With its many amenities and public spaces, The Pyramid is set to become an integral part of the neighbourhood, servicing citizens and tourists alike," Studio Libeskind said.

The project is expected to break ground by 2019. According to reports, construction must begin within five years or the building permits could be revoked.

The design was approved in May by a planning and building committee headed by the city's deputy mayor Kobi Kahlon.

Locally, the tower has earned the nickname "Freedom Pyramid" – a reference to Libeskind's proposed Freedom Tower for the World Trade Center site in New York.

Studio Libeskind has offices in New York City, Milan and Zurich. Daniel Libeskind founded the firm in 1989 with his wife, Nina, after he won the competition to design the Jewish Museum Berlin.