Spanish photographer Victor Enrich has used digital manipulation to splice together two buildings – the Storefront for Art & Architecture gallery in New York and the Spanish Republic Pavilion from the 1937 Paris Expo.

Enrich, a fine arts photographer who has recently begun to specialise in digital art, was one of 30 artists and architects invited by Storefront to create a work for its annual drawing show.

The exhibition is entitled Measure, so Enrich has developed a fictional scenario where the New York gallery becomes the basis of a new unit of measuring.

"The virtual world depicted in the piece shows buildings that are not being measured in the metric system or in US customary units anymore," said a statement from the photographer's studio.

"Instead, in an attempt to show the admiration that the artist professes to this gallery, he decides to give the gallery a new role: a measuring system whose main unit is the storefront," it states, adding that one "storefront" equates to 30.5 metres, or 100 feet.

To back up this claim, Enrich searched through architectural history for other buildings with the same size and proportions, and stumbled across the pavilion created by Catalan architect Josep Lluis Sert for the 1937 Expo. 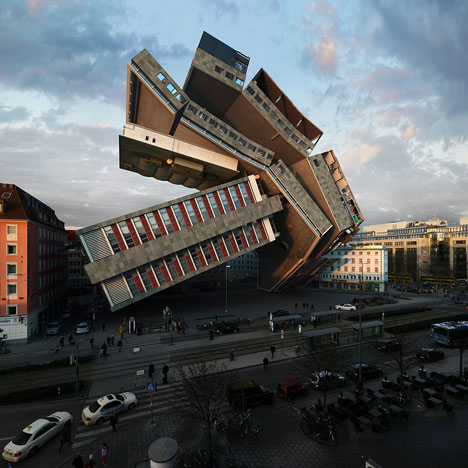 This building, known as the Spanish Republic Pavilion, was dismantled after the Expo was over, but a replica was built in Barcelona to tie in with the Olympic Games of 1992. Today it functions as a public library.

Enrich's studio said: "Taking in consideration that a context in which buildings are measured in 'storefronts' needs to be adopted by the international community, it has been mandatory to find masterpieces of architecture whose dimensions and proportions precisely rely on this brand new unit system, in an attempt to manifest that, even through architects were not aware of the existence of it, they actually used it in their designs."

"The pavilion was chosen because evidences amazingly show that the front facades of both the pavilion and the lower Manhattan building where the gallery Storefront is located share the same dimensions, in length and in height," it added. "The set of coincidences not only affect the overall shape but also include the height of the corresponding floors as well as the rhythm of the cornice."

To demonstrate this, Enrich used digital modelling to combine the two buildings – creating an impossible hybrid structure connected by a single column. While the pavilion looks largely unchanged, the Storefront gallery has been reorganised so that its ground-level facade is now at the top.

This shopfront, which features large geometric panels that pivot from the facade, was designed by New York artist Vito Acconci and architect Steven Holl in 1993. In Enrich's image, the panels have all been pivoted open.

Storefront made the news earlier this year when a facade installation created by architecture studio SO-IL was vandalised. In response to the graffiti, the gallery hosted a salon on urban violence.

Measure opens at Storefront on 14 August 2015. Other participants include Urban-Think Tank, Selldorf Architects, Reiser + Umemoto and Nader Tehrani of NADAAA.