The Pools series features an assortment of different public pools from Germany, Iceland and Italy, from standard lap pools to ones in unusual shapes. They are all photographed from directly overhead, and set against a custom-made backdrop pattern.

The German designer's aim is to remind people how important it is for municipalities to provide public access to water. He is against the use of drinking water for private swimming pools and opposes the introduction of fees for pools that were previously free to access.

"I denounce the waste and privatisation of water," he told Dezeen.

Zirwes started his Pools series back in 2000, when he would charter a helicopter to capture pools from a unique perspective.

"I love to create new views on things," he said. "There were not that many birds-eye-view shots those days, as there are today."

But now that drone technology is inexpensive and readily available, he is able to shoot them more easily. He uses a multicopter with a gimbal and camera attached to take most of the shots.

Highlights from the latest set of images include baby pools, diving pools, and even an abandoned pool filled with scum.

Zirwes researches the locations beforehand online, and gets in touch with the pool operators to make sure he has permission.

In post-production, he uses the tiles that surround each pool to create a tessellating pattern. This provides a uniform backdrop that brings the shapes and colours of the pools into sharp relief. 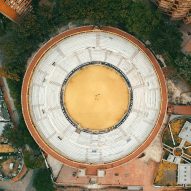 "In this clean and formal language the pictures focus our interest," said the photographer, describing them as "almost playful".

Zirwes hopes this "formal chic" aesthetic strikes a contrast with the serious message behind the series.

His hope is that Germany's new programme of remunicipalisation, which sees local authorities take back their services from private ownership, will save many of the country's public pools.

For instance, in 2013, when the town of Elbtalaue remunicipalised its energy grid, it was able to use the profits to support a public pool that had been running at a loss.

"The pools remind me of my childhood when I spent a lot of time in public pools," Zirwes said. "Public pools can still be a symbol for the importance that water should be free accessible to everyone."

Zirwes is of course not the only creative to start to explore the potential of drones. Earlier this year Dezeen released a documentary charting the rise of the technology, which shows how drones are disrupting everything from buildings to weapon design.

Other photographers exploiting drones include Edward Burtynsky, who shoots abstract landscapes to demonstrate the impact humans have on the planet.

Drones have also opened up viewpoints of architecture that people rarely get to see. For instance, graphic designer Camilo Monzón Navas has used the flying robots to capture images of notable buildings in Colombia's capital city Bogotá.