Brussels-based Delory has created five views of the Modernist masterpiece, a series he calls Pilgrimage to Modernity.

Each one shows the building's curving concrete and stone structure covered with huge colourful shapes and decorative emblems. But these aren't random – they mimic the murals made by Le Corbusier himself on the walls of a house owned by fellow architect Jean Badovici.

The house on the Côte d'Azur, named E-1027, was the work of Irish designer Eileen Gray. Corbusier would sneak into it, supposedly in the nude, and paint the pristine white walls, prompting Gray to accuse him of vandalism.

None of the images are real – Delory created them in Photoshop, as a reminder that all Modernist buildings were designed to be inherently flexible, able to adapt to radical change.

Completed in 1954, the Chapel of Notre Dame du Haut in Ronchamp, France, is considered by many to be Le Corbusier's best work, and one of the most important buildings of the 20th century. 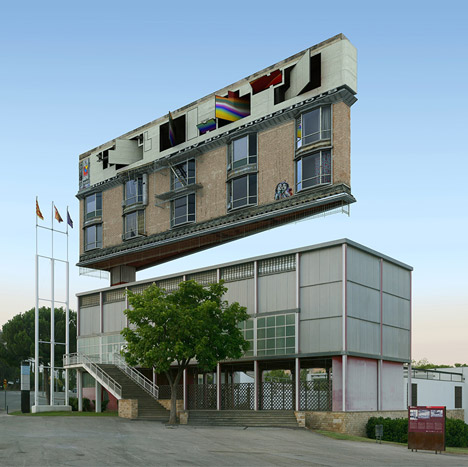 In Delory's images, all of these elements become transformed with colour, but are still recognisable.

If this radical change were to really take place, it would not affect the building's ability to function as a chapel, according to Delory. Furthermore, the murals can't be seen as vandalism, as they are the work of the architect himself, he suggested.

"What is left of the utopia, the better future that the Modern movement promised us at the beginning of the 20th century?" said the photographer in a project description.

"These 'museum buildings', preserved like precious objects, are the sole vestiges of all that remains of this movement," he added. "Pilgrimage to Modernity is a quirky tribute to these 'monuments'."

Both series echo real-life occurrences. Villa Savoye is only in pristine condition today thanks to an extensive restoration, following wartime occupation by the German and American armies, while the Ronchamp chapel suffered vandalism in early 2014.

To mark this anniversary, a number of designers and brands have launched products paying tribute to the architect. Examples include a collection of wooden objects by Jaime Hayón and a Renault concept car.