This see-through floating hut designed by Elise Morin and Florent Albinet is modelled on the remote cabin built by American author Henry David Thoreau in the mid-19th century (+ slideshow).

Morin and Albinet gave the Walden Raft walls and a pitched roof made up of sections of pine and acrylic glass, which are mounted on top of polyethylene floats.

The installation is based on, and named after, the cabin that Thoreau built in the woods around Walden Pond, Massachusetts, in 1845.

Thoreau documented the two years, two months and two days he spent living the cabin in his book Walden; or, Life in the Woods – which is revered as a study on self-sufficiency and the virtues of a simpler life.

Situated on Lac de Gayme in the Auvergne region of central France, Morin and Albinet's cabin follows the proportions of Thoreau's hut – with a 10-square-metre footprint and a height of four metres.

Visitors can move the cabin along a cable strung from the shore to an anchor in the middle of the lake by rotating a central reel.

"Buoyancy and mobility make this shelter a space that is neither too near nor too far from human society," said Morin.

The designers introduced transparent acrylic glass panels to the original design, to create the effect of levitating planks of wood where they are set into its surface.

"I needed to find a solution to express interaction between interior and exterior," said Morin. 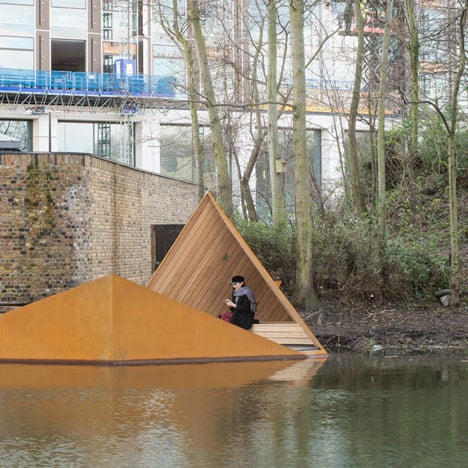 "The combination of wood and a modern industrial material, acrylic glass, brings transparency to the construction while maintaining its protective function."

Morin describes the project as "something at the crossroads of art and architecture" that she says addresses questions about autonomy, isolation and solitude, but also contemplation and enlarged perspectives.

She hopes it will help people rethink their relationships with society and the environment, and the role of art within culture.

Lac de Gayme is an artificial lake created from a bog in 1983, and sits at the same latitude as the location of Thoreau's original cabin.

The installation will remain in place until 27 September 2015 as part of this year's Horizons arts and nature festival.

It is one of 10 sculptures installed across the mountainous Sancy region in France for the event, along with a life-size plane crash constructed from wood and a field of giant dandelions.

The archetypal cabin form has been explored by other designers and architects.

Recently, ECE Architecture installed a mirror-clad beach hut on the coast in Sussex, while designers including Jasper Morrison and Ilse Crawford were commissioned to interpret the concept of "home" inside hut-shaped pavilions in Trafalgar Square for the London Design Festival 2014.