Graduate shows 2015: Royal College of Art graduates Begum and Bike Ayaskan have designed a plant pot with a complex origami form, which enables it to unfold and accommodate more space for roots over time.

Growth is a collection of flowerpots made of polypropylene, machined with a computer numerically controlled (CNC) router into a cylinder made up of tessellating triangles.

Each vessel can expand to over five times its original volume, either naturally as the roots push outwards or as a result of human intervention, making the process of re-potting unnecessary.

A similar concept was used by designer Emanuele Pizzolorusso when creating a flexible flower pot that can double in capacity. 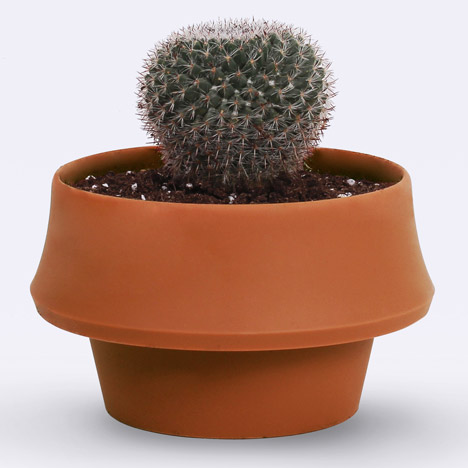 "There is a strong disconnect between nature and the environments we are used to and comfortable in as humans," said the designers, who are twins. "The spaces and objects we build and surround us with are very static. In nature, everything evolves, adapts, grows, blooms, degrades, dies, gets absorbed, reused."

"We wanted to contemplate the relationship between nature and the manufactured object, and find a way to merge the two together," they added.

To do this, the pair looked into methods that would enable transformation in three dimensions, and it quickly became apparent that origami held the answer.

"We went through many existing origami patterns and tried a few of our own to see what would work best," they said. "We chose a triangle-based pattern to modify, and calculated the equation that would give us the perfect cylindrical shape. The result is a scalable pattern that can be easily modified to have more or fewer facades."

Other designers have used origami as a starting point, including Jule Waibel, who launched a collection of seats made from three-dimensionally steam-folded wool felt, and Japanese studio TSC Architects, which modelled the roof of its Origami House in Japan's Mie Prefecture on the folded paper shapes.

Begum and Bike Ayaskan's Growth pots are made from flat sheets of polypropylene that are heat welded at the edges to form a cylindrical shape after the CNC routing. A mesh made from the same material is attached to the base, allowing water drainage.

The pot starts off in its folded form, ready for a small plant to be homed inside.

The designers estimate that a small tree would normally need re-potting at least three to four times in its lifetime, but Growth enables the plant to have "a sense of freedom" because its pot does not inhibit its development.

"We wanted to show that even a very simple object, like a plant pot, could be improved and changed by understanding its life cycle and implementing behaviour patterns through geometry and structure," said the designers.

The pair is currently talking to manufacturers and hope the product will be available, in a range of colours, within the next few months.

Growth was presented at this year's Show RCA graduate exhibition in London, where a staircase that straps to a tree trunk and speakers made from a new material comprising plant fibres and naturally fermented cellulose were also on display.

Photography is by Thomas Essl.