Launching at Copenhagen's biannual Northmodern design fair this week, the Grain lamp takes its name from a new composite material that blends bamboo with polypropylene, while allowing the natural colour and textures to remain visible.

The result is a dappled, matt surface that pairs the smoothness of plastic with the fibre of the bamboo.

The lamp features an upturned edge to add character to its relatively simple shape. Flecks of bamboo grain can be seen across the shade, which lends subtle colour variations and effects to the light.

The pendant is available in six different colours – black, grey, red, white, green and natural cork – and is fitted with an energy-efficient LED bulb that has up to 10,000 hours of life. 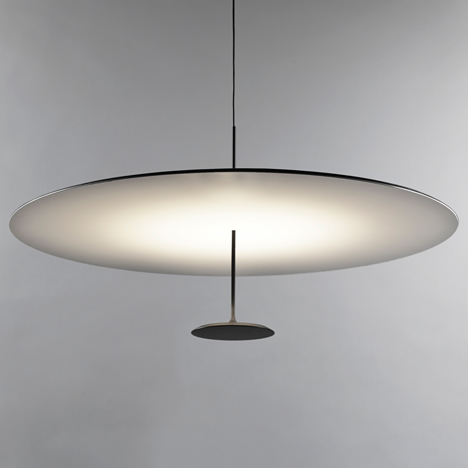 "Grain is a versatile, environmentally friendly pendant lamp with a warm and welcoming appearance that provides a great quality light," said Fager. "You can actually see the natural stains and patterns of the material's structure in it."

Fager also experimented with materials at the start of 2015, when he worked with fellow Scandinavian designer Andreas Engesvik to create a collection of pressed-felt room dividers from recycled bottles.

His grip candlesticks were included in Muuto's 2014 collection of homeware, and featured a horizontal tab that allowed them to be moved from place to place while lit.

Following its inaugural event in January, the second edition of Northmodern is taking place in the Danish capital from 13 to 15 August 2015, where the debut homeware range by AYTM is also on show.

Bamboo is increasingly being used in product design because it is both lightweight and strong. Nendo has recently turned woven bamboo baskets into chair backrests, while Samy Rio won a French design award for his hairdryer and speakers made from the material. Bamboo – one of the fastest-growing plants in the world – is also making a comeback in architecture.