A masterplan by Ennead Architects and RAFT Landscape Architecture for a nonprofit farm in New York aims to address two problems in the US: high unemployment among military veterans and a shortage of agricultural workers.

Called Heroic Food Farm, the facility will include eight micro-housing units for veterans and a community building for living, dining and instruction. An existing farmhouse, hayloft and barn will also be renovated.

The project is slated to be built on a 19-acre (7.6-hectare) site in Hudson Valley, New York – a hilly region dotted with farms and small towns.

The buildings are carefully placed in relationship to each other and to take advantage of the picturesque landscape.

"It's about striking a balance between creating privacy for the individual and fostering a sense of community with shared spaces that open out to the view," said Andrew Burdick, director of Ennead Lab, the architecture firm's public interest and pro-bono division.

The eight housing units, meant to accommodate individuals or couples, are linked by raised decks. The shed-like dwellings will rest on piers to "sit lightly on the land," Burdick said.

Each dwelling is 325 square feet (30 square metres) and contains a sleeping area, bathroom and kitchenette. The architects did not incorporate living rooms, as the residents will be encouraged to spend time in the community house. 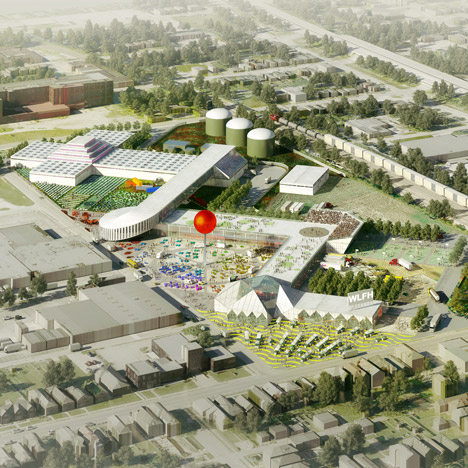 The new buildings will be designed to meet Passivhaus standards, which mandate extremely low energy consumption.

Burdick cites Thomas Jefferson's academic village at the University of Virginia – a quadrangle surrounded by residences with linked porches – as an inspiration for the siting of the structures.

Veterans in residence will receive instruction and mentorship and will be placed at nearby farms during peak harvest season. At the Heroic Food Farm site, they will also raise livestock and cultivate produce in greenhouses.

The founders of the Heroic Food organisation believe they can begin to fill an important gap in the US labour market.

According to a recent report in the Wall Street Journal, a shortage of farm workers is reducing agricultural production in the US by roughly 9.5 per cent per year. Many farmers are also reaching retirement age.

Military veterans could help fill the gap. The unemployment rate for soldiers who have served since 2001 is 7.2 per cent, according to the US Labor Department.

"The project appeals to people on both sides of the political spectrum," Burdick said. "It's just a good idea."

Though small in scale, Burdick hopes Heroic Food Farms could serve as a prototype that could be replicated in rural areas across the country.

With the masterplan completed, the farm project has received approval from the town of Claverack, where it will be built. Fundraising is now underway, and the architects hope to break ground next year, with a completion date of early 2017.

Heroic Food Farms will be located near the town of Hudson, which has become a regional centre for art, design and food. The artist Marina Abromovic is building an institute for performance art, designed by OMA, in Hudson.