Chinese firm Arch Studio was asked to redevelop the group of grey brick buildings in eastern Beijing, believed to predate the Qing Dynasty that ruled Imperial China between 1644 and 1912.

The studio began by repairing the old brickwork, and removing and replacing a pair of decaying timber structures built in the 1970s.

The L-shaped block forms part of a warren of narrow streets and traditional courtyard housing known as a hutong.

Although many of these high-density neighbourhoods have been destroyed, some are being redeveloped to create contemporary housing, businesses and installations. Beijing firm MAD has previously extended a hutong house with a series of metallic bubbles, while local studio Instant Hutong has charted the disappearing areas with intricate maps.

A pivoting glass door set in a narrow alley leads from the street into the tea house.

Curving courtyards cut into the body of the complex are filled with bamboo shoots and enclosed with glass panels to make the building weather-tight. 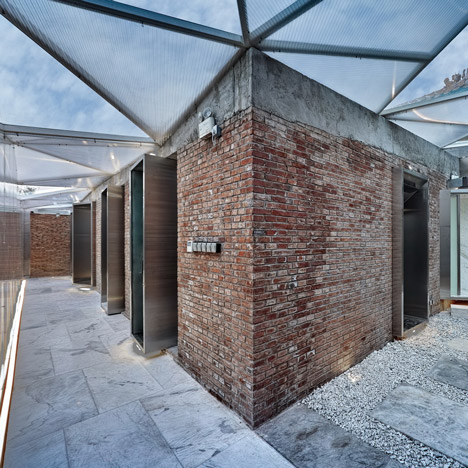 A series of private tea rooms are set around the edge of the courtyards and have slatted timber doors that provide outdoor access.

The traditional pitched and tiled roofs of surrounding buildings can be seen from the open-air courtyards.

"The new environment demands comfort requirements that the previous architecture cannot sustain," said the studio. "For the building to be temperature resistant as required, it will have to be completely closed."

"The gallery of the traditional architecture takes a half inside half outside form, significantly increasing the beauty of the garden," the firm said.

A corridor winds through the centre of the interlinked complex and around these glazed pockets. Wooden dining sets stationed along the pathway provide more public entertaining areas.

Original brickwork and timber are left exposed across the interior to contrast patches of new white-painted brick and glass, intended to create "a mutual dialogue between the past and future".

Photography is by Wang Ning.