CRG Architects has unveiled a proposal to replace slum housing with a pair of skyscrapers comprising stacks of brightly coloured shipping containers.

CRG Architects, which has offices in China and Nigeria, came up with the concept for Container Skyscraper to provide temporary accommodation to replace slum housing in developing countries.

The firm proposes that recycled shipping containers could be stacked to create high-density, cost-effective housing in urban areas – building on a string of inventive proposals for the storage structures from architects and designers, varying from a cross-shaped micro home to a fan-like photography studio.

"There has been a phenomenal shift towards urbanisation, with six out of every 10 people in the world expected to reside in urban areas by 2030."

"In the absence of effective urban planning, the consequences of this rapid urbanisation will be dramatic," Gomez added. "In many places around the world, the effects can already be felt."

Approximately 2,500 containers would be needed to complete the proposed scheme, which could house up to 5,000 people, according to the architects.

The steel containers would be supported by a concrete structure and arranged with their edges overlapping to create two cylindrical towers – one measuring 400 metres in height and the other 200 metres.

"The maximum number of stacking containers one above the other is nine units," explained Gomez. "It means we need a main structure to support them if we want to have such height."

By pivoting the containers to create a building with a hollow centre, windows would face away from neighbours and maximise views of the city.

The architects propose that a single unit could be subdivided to provide a studio flat, while up to three containers could be joined to provide a three-bedroom family residence.

Columns of vertically stacked containers in the core of the towers would house an elevator, while empty containers could be used for circulation and vertical gardens as well as medical services, schools, entertainment areas and small markets.

Service pipes and cabling would be threaded through the existing cavities in the base designed for to allow the lifting of the containers with forklift trucks. Gaps between the structures would provide natural ventilation. 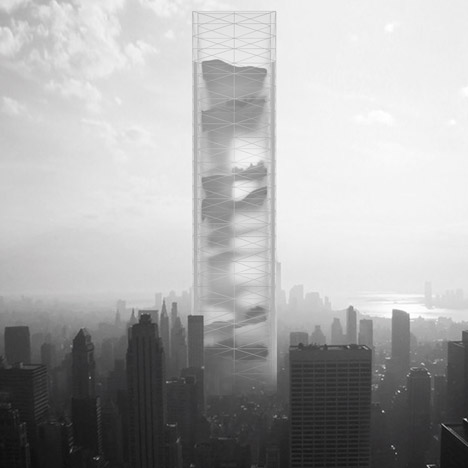 The towers feature a red, yellow, green and blue colour scheme. The blocks of colours are intended to represent the hottest and coldest parts of the building, with red containers placed on the south facade, blue on the north, and green and yellow on the east and west faces to show the transition in temperature.

The concept was the runner up in a Mumbai housing competition. CRG Architects is in discussion with humanitarian organisations to investigate its application elsewhere.