These renders by London architect James Whitaker depict a proposal for a low-cost studio space in Germany comprising a cluster of shipping containers, which are arranged to direct sunlight into the interior at different times of day (+ slideshow).

Whitaker developed the concept in 2010 while working as a photographer, after he was approached by an advertising agency interested in building a workspace in the Black Forest near the town of Hechingen.

The agency closed before the project could be realised but Whitaker recently created some detailed renderings to promote his studio's move into digital imagery production.

The client had originally requested a design using shipping containers to reduce its cost, which formed the basis for the architect's suggestion to cluster the metal boxes in a radial composition.

"The inspiration for the design came from crystal growths in a science laboratory and the eleventh-century castle that overlooks Hechingen," Whitaker told Dezeen. 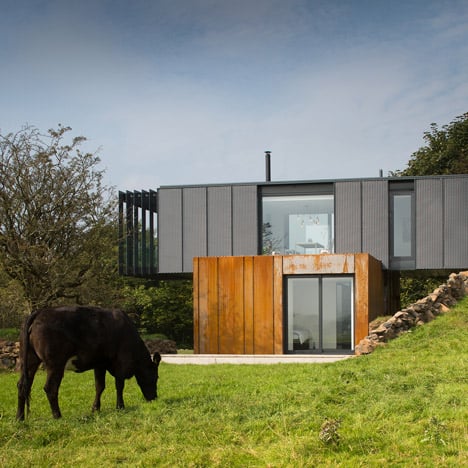 Hohenzollern Castle, which was reconstructed in the 19th century by King Frederick William IV of Prussia, is positioned on top of a hill near the town and features an ornate arrangement of towers in the Gothic Revival style.

The verticality of the castle's turrets is evoked in the steeply sloping forms of the containers, which would be directed to track the path of the sun as it travels across the sky.

Before the project was halted, Whitaker had sourced a supplier for the containers in Rotterdam and a metal fabricator in Hamburg that would adapt the structures so they could be bolted together on site. The bases of the cantilevered boxes would be fixed to the tops of the lower containers to anchor them and prevent them tipping forward.

Daylight would be funnelled through the complex roof design into a central meeting area, surrounded by workspaces accommodated within the spoked single-storey interior. The structure would be raised above the ground on concrete pillars.

The proposal was created for a rural site outside the town but Whitaker believes the design could be located anywhere. He added that he would like to work with a new client on developing the project further for a different site.

Whitaker also explained that his move into the world of computer-generated imagery has been informed by his experiences as a photographer and his understanding of how light, shadows and reflections alter the appearance of a building.

"In many ways visualisations and photography are very similar," he said. "A good photograph should seduce the viewer and intrigue them to find out more; it should draw them in and trigger an emotion. Visualisations are just the same, and as such I approach them in the same way that I approach photographs."

"With visualisations you can approach the image as you would a photo shoot in a studio," the architect added, "manipulating the light and the materials to achieve exactly the moment you are seeking. The key then becomes bringing in that element of serendipity – making the image feel human and triggering an emotion."