The Broad museum designed by Diller, Scofidio + Renfro is set to open in September, heralding an architecture boom in Los Angeles.

The museum, which occupies a site on LA's Grand Avenue across the road from Frank Gehry's iconic Walt Disney Concert Hall, is due to open on 20 September.

It will house over 200,000 pieces of postwar and contemporary art from the collections of Eli and Edythe Broad, who also backed the Zaha Hadid-designed Edythe and Eli Broad Art Museum in Michigan, which opened in 2012. The building will also become the new home for the Broad Foundation, which is currently based in Santa Monica.

A photo posted by Joshua Gunther (@joshuaguntherphotography) on Jun 5, 2015 at 12:24am PDT

Instagram users and officials from the Broad have been posting images of the building, including glimpses of the interior, as it readies to open. The images offer a preview of the structure designed by the New York architecture firm, well ahead of the publication of official photography.

The Broad is the first completed building in a slew of major projects in LA, and marks the beginning of a new boom for architecture.

On Grand Avenue, LA resident Frank Gehry is planning a mixed-use development opposite his Walt Disney Concert Hall. He is also masterplanning an overhaul of LA's run-down LA River, and has just unveiled plans for five new buildings on Sunset Strip. In Beverly Hills, Chinese firm MAD is planning its first US project – a residential block modelled on a hilltop village.

Many of the major projects are for museums and art institutions along Museum Row – a section of Wilshire Boulevard, which intersects with Grand Avenue. Swiss architect Peter Zumthor is currently working on plans for a new home for the Los Angeles County Museum of Art (LACMA). 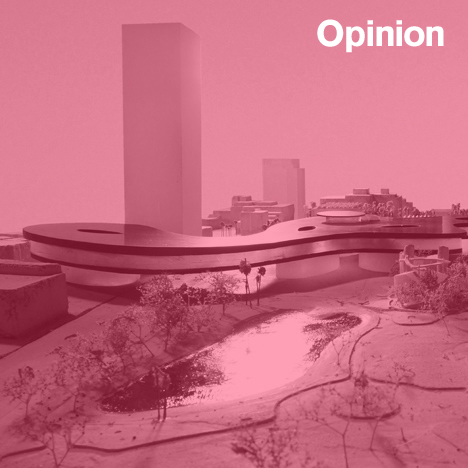 Renzo Piano is designing a museum of movie history for the Academy of Motion Pictures Arts and Sciences, also on Museum Row, while KPF is planning to re-clad the Petersen Automotive Museum with a facade of metal ribbons as part of a wider refurbishment.

Journalists and a small number of public visitors were first given a preview of the three-storey Broad building in October 2014, viewing the incomplete galleries and the interior effect of the building's distinctive latticed concrete exoskeleton, which also covers the roof.

This wrapping – made up of 2,500 fibreglass-reinforced concrete elements – is designed to allow daylight to gently penetrate the interior without over-exposing the artworks and is now complete.

"The Broad is an object lesson for designers caught on the hamster wheel of producing interestingness," said Dezeen columnist Mimi Zeiger, who attended the preview. "The architecture succeeds in dampening the urge for entertainment, and makes the spectacular simply mundane."

Speaking to Dezeen last year, architect Elizabeth Diller said she had wanted the building to be distinctively different from the Walt Disney Concert Hall.

"We realised it was just useless to try to compete – there is no comparison to that building," she said. "Compared to Disney Hall's smooth and shiny exterior, which reflects light, The Broad is porous and absorptive, channeling light into the public spaces and galleries."

But despite the images on Instagram, there are some parts of the building that still remain unseen. Almost half of the 1,000-square-metre structure will be given over to archives and storage areas – occupying what the architects describe as a "central mass".

Instagram is becoming an increasingly popular outlet for architecture and design projects. Frank Gehry's new headquarters for Facebook debuted on Instagram, with visitors posting images during the building's preview before pictures were issued for publication.

The opening of New York's new Whitney Museum was heavily Instagrammed, with journalists posting images on the platform before their own publications had been able to post official images online.

Earlier this year, Dezeen's #milanogram2015 campaign saw over 10,000 images from Milan's design week posted to the platform, offering behind-the-scenes access to readers around the world.