Inerja is a traditional sponge-like fermented Ethiopian bread, surrounded in ritual and ceremony and made from an African grain called teff.

While it is still made in cities around the world, the ritual is lost because contemporary utensils don't translate.

For example, an electric version of the hot plate used to cook the bread is too large and expensive for most homes, resulting in injera being made in single portions in normal kitchen pans.

"The preparation of injera holds a monumental place in the Ethiopian kitchen," Douiev told Dezeen.

"Through in-depth research in Ethiopia and amongst Ethiopian communities in Israel, I understood that the future of teff and injera was at risk, which led me to the idea for my project."

"Injera should be eaten together," added the designer. "It creates conversation, trust and suits the tradition. Today injera is made with tools that are not dedicated to the injera ceremony." 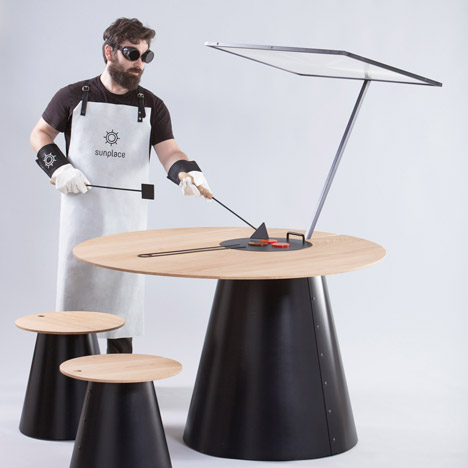 "The sourdough tool will often be a covered plastic bucket that does not tell anything about its rich culture. The pouring tool is often a tea pot or a measuring jug."

Douiev worked under the guidance of professor Ido Bruno to design a set of specific utensils for the preparation of injera.

Taking design and material cues from the original utensils used over a fire in Ethiopian villages, she has updated the utensils for contemporary kitchens while preserving the ritual associated with making and sharing injera.

Her collection is made from African wenge wood, Teflon-coated aluminium and heat-resistant plastic.

Pieces in the range include a bowl with a perforated lid, a ladle, jug, and ring, as well as a hot plate with a lid. The hot plate also functions as a serving platter and a wall decoration.

The jug is influenced both by its traditional counterpart, usually made from a squash or gourd, and by a coffee pitcher that has a curved base.

This shape forces it to be placed on a ring – a reference to ancient tools placed on rings next to the fire. The ring also functions as a spoon holder, keeping the kitchen tidy while cooking.

The elongated shape of the spoon echoes sticks used in traditional fire-based cooking. "The stick has many functions in the African kitchen such as moving charcoals and stirring the food," said Douiev.

When not in use, the hot plate hangs on the wall as a decorative object, saving storage space. Its back plate was designed to reference the local Ethiopian craft-straw braid.

"Through these utensils a new ceremony takes place, in which cultural elements are renewed," said Douiev. "Elements that have been lost during the cultural migration from village to city, and from inside Ethiopia to foreign countries."

"With the aid of designed objects which tell a story about a culture, heritage and functionality, I believe the properties of this ceremony can be passed on everywhere and to every generation," she added.

Photography is by Oded Antman. Movie is by Soda creative video.