Based on traditional tools and science equipment, the Weathered pieces measure various atmospheric conditions including wind and humidity, as well as seismic activity.

Uniting wood and metal, each sculpture uses movement of some kind as feedback in response to its surrounding conditions.

"We started up experimenting with a lot of different things, but after a while we began to concentrate on old measuring tools and weather phenomenons," founding partners Jørgen Platou Willumsen and Stian Korntved Ruud told Dezeen. 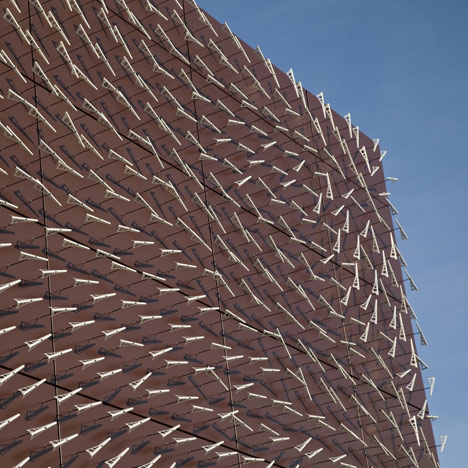 "Weather has always been fascinating to us. We wanted to combine the aesthetics of science equipment and do our own interpretation of their functional properties," they added.

The Hygrometer rests on a cylindrical oak base, with a thin bundle of horsehair threaded between turned brass components that hold a U-shaped strand of carbon fibre. Depending on how much moisture there is in the surrounding air, the horsehair subtly expands or contracts.

The Seismoscope measures seismic movements with a sculpture made of a circular copper panel and suspended brass stylus, held in an oak frame. The pendant moves against the panel in response to seismic activity, leaving marks on the copper as a record.

Swell reports on wave movement in air or water using a pair of wooden cylinders topped by copper rings, which hold a horizontal rod with a pebble attached at one end. These rock back and forth in response to nearby movement.

The Breeze sculpture consists of three wooden stands that hold flat oxidised copper circles and rings, joined together by rods, that move to show the wind direction.

Each metal circle shows different patination patterns. The designers said: "In many ways we have kickstarted a process that over time will occur naturally outside." 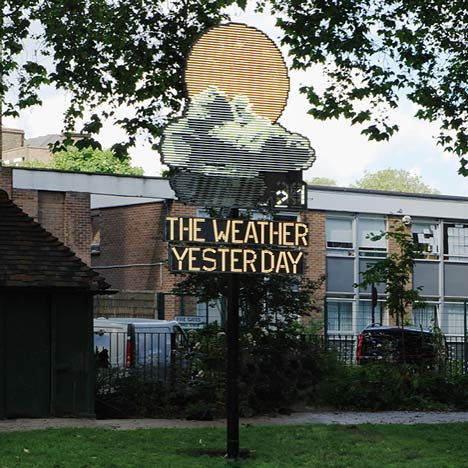 The Weather Yesterday by Troika

"We wanted the surfaces to refer to a process where nature over time will take control of their basic materials and return to zero."

The pair had previously experimented with the physical weathering of materials in project Pat. vol 1, which also featured sculptures with oxidised metal circles.

"This series is a more conceptual project in the sense that the objects refer to nature and weather phenomenons," the studio commented. "There is also something beautiful with analogue objects, that have a clear purpose and function."

The sculptures will be shown as part of the 100% Norway exhibition at this year's London Design Festival, which takes place at the Truman Brewery from 24 to 27 September 2015.

Work from fellow Norwegian designers Osloform, Gridy and Tonning & Stryn will also be on display.