Danish designer Emma Jorn has partnered with rainwear specialist Ilse Jacobsen to design a range of waterproofs that are easy to wear while cycling.

Many of the items are designed for cyclists, with skirts featuring longer fronts to keep legs dry and shorter hems at the back to allow for freedom of movement. 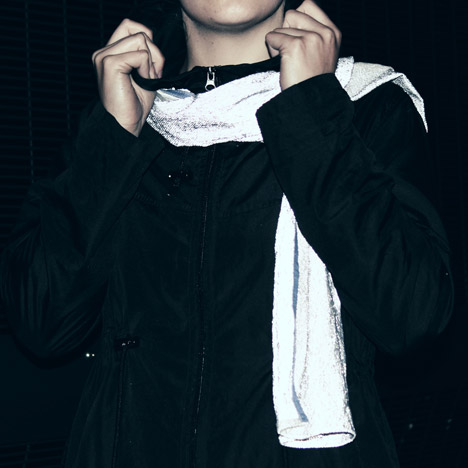 "I wanted to redesign the concept of rainwear," Jorn told Dezeen. "While riding my bicycle on yet another rainy day in Copenhagen, it struck me how much I missed rainwear that made me look brilliant instead of goofy."

"It dawned on me that I could not be the only girl in the world wanting to be fashionable in the rain," she added. "I wanted for girls to long for rainy days instead of dreading them."

The designer exposed the taped seams that are incorporated into most rainwear to keep them water-resistant, and also created several lightweight designs that can be folded into their own pockets for transport.

Other design details include transparent zippers, and prints based on footage of Berlin.

Jorn previously created a range of similarly unconventional rainwear – Takaokami – which she funded via a Kickstarter campaign in 2015.

The campaign included a full-length poncho, or "rain burka". Originally designed for stylish Muslim women, Jorn eventually positioned it as a product for all women, regardless of faith, who wanted a poncho that wouldn't obscure their eyes when they turned their head.

Dutch bike manufacturer Vanmoof also tackled the specific needs of cyclists, with a fold-up poncho that covers both bike and rider.