Seoul architecture studio AIN Group has built a three-metre-wide house for three residents in one of the city's most densely populated districts.

AIN Group used various tactics to fit the property in the available space – a site three metres wide and 13 metres long – but also to ensure there is enough light inside.

These included adding split floor levels, translucent walls and a skylight, similar to other recently completed narrow homes including a 2.5-metre-wide house in Tokyo and a 3.4-metre-wide residence in Osaka.

Another challenge was providing each resident with their own personal space, all with a suitable level of privacy.

"The task at hand was to design a shared house for three people in such a confined site, and create space that enables natural sunlight with privacy, which was challenging," said the architects. 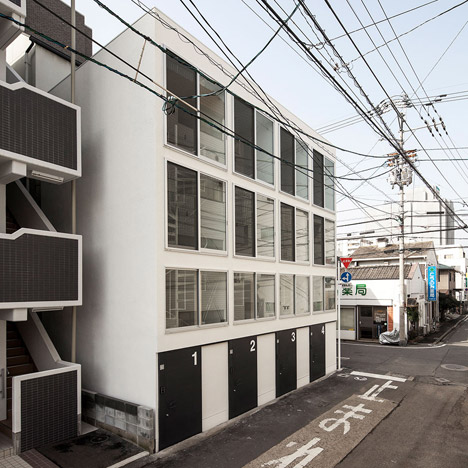 "The ideas that we came up with were having a 'skip-floor' structure, and applying polycarbonate panels [to the walls]."

The building has three storeys, which are divided internally into five levels. Bedrooms occupy the two uppermost storeys and the partially sunken lower level, while the spaces in between provide a communal living and dining space, and an extra living room.

The main staircase is in the middle of the building, forming a natural divider between all spaces. There is also an extra staircase at one end that links the middle and uppermost levels, ensuring no bedrooms are used as access routes.

The translucent polycarbonate wall wraps around the south-east corner of the building, allowing natural light to permeate rooms on all five levels, while the skylight is positioned directly above the central staircase.

"Having this wall allows light to delicately penetrate, and the skylight creates a warm atmosphere," said the team. "It minimises the cramped condition of the interior space, which is just over two metres in width."

Furnishings and finishes inside the house are kept simple, but colour was added to identify the communal areas. The central stairwell was painted in a shade of teal, while black paint was used as a backdrop for the kitchen.

For the building's construction, AIN Group specified a modular structure that could be prefabricated off site to ensure a straightforward, speedy and cheap turnaround.

"Building with a standard construction method was impractical and unfeasible, due to the limited space for loading construction materials and working space, and the complaints caused by this could have had negative effects on the construction period and overall cost," added the team.

The completed building has an area of 72 square metres. There is also a parking space at the house's entrance, sheltered beneath the cantilevered upper floors.

Photography is by Cho Jaeuk.