The wooden frame of this two-storey family home in Japan's Shiga Prefecture is disguised by a layer of ridged steel panels (+ slideshow).

The two-storey L-shaped House in Shigaraki by Ōtsu-based studio Junichi Kato & Associates was designed for a family with small children.

Its dark brown appearance was created using a resin paint, which coats the Galvalume panels – large ridged sections made from a steel core covered with a zinc and aluminium alloy – used for the facades.

A large steel-clad pent roof – distinguished by its single slope – covers the entire building, which rises up from one storey on the eastern side to two storeys on the west.

A bedroom for the children is tucked into the eaves and protrudes slightly from the front of the building.

Communal living spaces are concentrated on the ground floor, organised around a double-height living room with a wood-burning stove. Glazed double doors open out to a patio with a wooden step that doubles as a bench. An additional pair of windows above the doors ensure that the interior receives plenty of natural light.

A traditional Japanese tatami room and a kitchen sit at opposite ends of the main living space.

A series of openings and slits cut into the walls of the living room at different levels are designed to create a flow of air and views through the house.

"Air and natural light move around the space under the large roof as the day and the seasons change," said the architects. 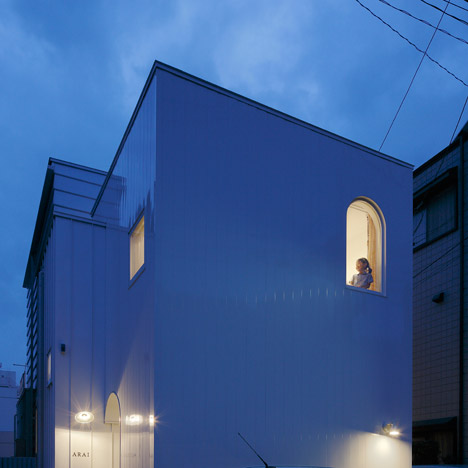 "It is our hope that, under the large pent roof, family members will be able to get a feel for each other irrespective of where they are, and that they can enjoy the changes in the natural environment each day."

The master bedroom occupies the majority of the east wing and features a walk-in storage area and en-suite bathroom, as well as a glazed door that provides access to the patio.

The beams of the roof have been left exposed through the building, and the wood is echoed in the floor coverings, which contrast with the white-painted plaster walls.

"In careful consideration of the needs of a family with small children, the interior is finished with natural plastering materials, pure flooring materials, and natural paints," said the architects.

The house is named after its location in the former town of Shigaraki, which was once a centre for Japanese pottery making thanks to its natural clay beds. Pottery from the area is known as "Shigaraki ware", and it is still regarded as one of Japan's "six kilns" – functional historic potteries.

Shigaraki was merged with four other towns to create the Shiga Prefecture city of Kōka in 2004. Other recently completed houses in the prefecture include a family home sandwiched between a shrine entrance and a farm, and a diamond-shaped residence and artist's studio.