Maison&Objet 2015: this cast-iron candle holder by Norwegian designer Lars Beller Fjetland automatically puts out the flame just before the wick burns out (+ movie). 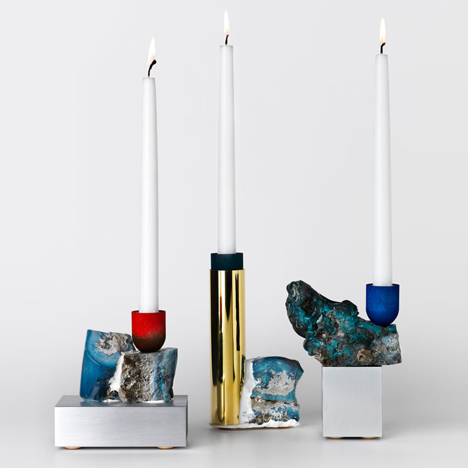 The device features a pendulum with a needle on the end, which is inserted into one side of the wax close to the bottom of the candle.

As the wick burns, the wax melts and releases the needle, allowing the weight to swing down – pulling with it a domed cap that falls over the flame to put it out. The weight can be adjusted to accommodate candles of different sizes.

"This simple mechanism is powered by the stored momentum of the adjustable weight that rests on the very tip of the moveable arm," said Beller Fjetland, who has previously created a lamp shaped like a dining cloche lifted up in the air.

"It is a relatively fool-proof solution that only relays on gravity to function," he added.

Moment is made almost entirely from cast iron, which forms the circular base, curved arm and rounded cap.

"Cast iron was the perfect functional, as well as aesthetic, match for this design," said Beller Fjetland. "The matt and heavy appearance of this peculiar object creates a nice contrast to the brilliance of the slow burning flame."

Beller Fjetland came up with the idea for the design during a visit to a museum in Oslo, where he found a collection of 19th-century candelabra.

"Amongst these pieces was an extraordinary device described as a candle extinguisher," he said. "I couldn't help being completely obsessed with this quirky concept, and I immediately decided that I wanted to create my own modern and simplified interpretation of this remarkable contraption."

The candle holder will make its debut within the latest Wrong for Hay collection at the Maison&Objet trade fair in Paris, which continues until 8 September 2015.

Hay is also launching a collection of outdoor furniture by the Bouroullec brothers at this edition of the event, which takes place in both January and September each year.

The humble candle holder has been recreated in a variety of unusual iterations in recent years. These include a design that looks like an unfinished sketch, brass accessories based on cogs and versions made from discarded slag.

Photography and movie are by Sjur Pollen.