French 3D-printing company Fabulous has brought together a team of scientists and architects to imagine a bubble-shaped habitat for Mars that can be printed on the red planet.

The Sfero house features an internal and external dome, with a protective pocket of water between the two. A single corridor rests on the planet's surface and allows access to the interior, which would have an upper and lower level linked by a spiral staircase. "In the future we might print not only buildings, but entire urban sections"

Led by Fabulous, the project team united a range of disciplines, with scientists, architects, image specialists and 3D-printing specialists all contributing to the Sfero habitat design.

The house would start off as a central drilling rod that burrows several metres into the planet's soil to extend two robotic arms, which would harvest materials to be used for 3D-printing the habitat's internal and external dome-shaped shells.

The spherical shape has been designed to offer high resistance to Mars' low atmospheric density. 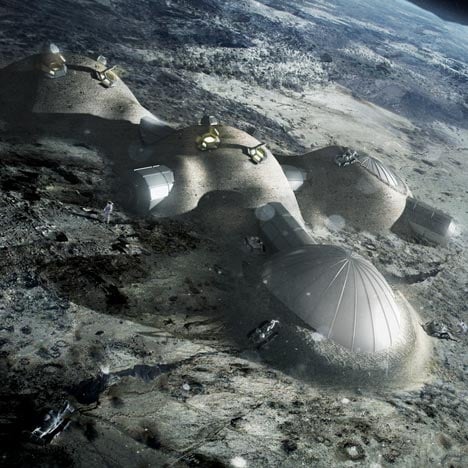 Foster + Partners to 3D print buildings on the moon

The design aims to use the red planet's abundance of iron oxide – discovered in dust samples and rocks brought back by NASA's Pathfinder rovers – which would form the raw material for 3D printing. The powdered iron particles would then be fused together by laser, and the levels of the habitat printed layer by layer.

The arms would also seek out permafrost – soil that has been at or below freezing for at least two years – to be melted and used as a 30-centimetre-wide water pocket in between the two shells to protect against solar radiation.

Fabulous founder Arnault Coulet believes the water layer could be a "permanent psychological reminder of the main element of the mother planet – water constituting a sort of protective amniotic fluid for humans."

The team has identified the planet's Gale crater as an optimum landing point, with a high deposit of iron oxide and the possible presence of liquid water. The soil composition in Hawaii and the Mojave Desert in California would also offer the team a chance to manufacture and test a prototype Sfero on Earth.

The project has been created in response to NASA's call for designs for 3D-printed habitats for Mars, despite the competition being only officially open to US residents.

With the Mars One mission an ongoing topic of debate, the planet has also proved a rich source of design challenges. ZA Architects suggested that humans could colonise the red planet with underground dwellings dug out by solar-powered robots.

Engineers at NASA are currently testing an unmanned aerial vehicle that would scope out the terrain of the planet to decide the best routes for rovers to explore.