New York chocolatier Mast Brothers has overhauled its store in Brooklyn to create a stripped-back space that allows visitors to view the chocolate-making process (+ slideshow).

Encompassing 3,000 square feet (280 square metres), the Minimalist-style chocolate shop is located inside a building that once served as a spice factory and today houses various small companies.

The building is located in Williamsburg, a former industrial area that has become one of Brooklyn's most desirable neighbourhoods.

Mast Brothers was founded in 2007 and is well known in New York for its high-quality chocolate bars that come wrapped in distinctive packaging. In addition to bars and confectionery, the company recently began selling non-alcoholic chocolate beer.

The company has occupied its current space since 2011 and wanted to update the store to better reflect its brand. It also wanted the space to visually echo a store the company opened in London's Shoreditch neighbourhood earlier this year.

Both projects were conceived by the company's in-house design team.

The New York project entailed simplifying the retail area and roasting space. "Most of the renovation project was about reduction and flow," said the design team. 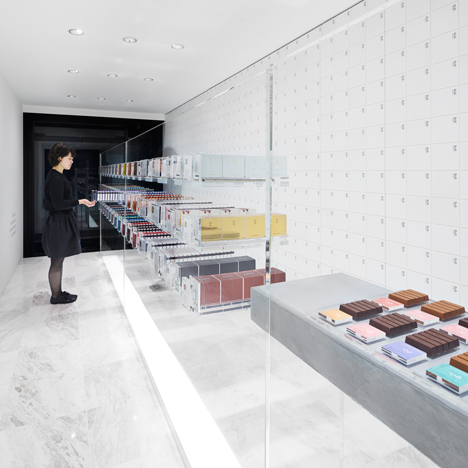 Exposed brick walls were painted white, and concrete floors were resurfaced. Burlap bags of cocoa beans line a wall in the linear space.

The team fabricated seven new display cubes made of wood-fibre panels that were imported from Portugal.

"We chose this material to match the look and feel of our black chocolate boxes," said the team. "We finished these surfaces with a special black wax that gives a very deep, matte appearance."

The team extended the retail space so customers can easily walk up to the refining room and view the chocolate making process. The space includes equipment such as stone grinders, which are used to grind down cocoa beans.

The team brought in three small stainless steel brewing tanks, as well as a draft system for the new chocolate beverage.

"The beer is brewed in-house with freshly roasted cacao, cane sugar and water before being carbonated with nitrogen," explained the company. "The result is a non-alcoholic, lightly sweetened and refreshingly delicious beer with a creamy head."

In addition to the new store, the company has opened a "chocolate laboratory". Also located in Williamsburg, the space is "dedicated to experimentation and innovation, where the team will continue to research, test and develop new chocolates, recipes and products." It also serves as an event space.

Other projects for confections include a shop in Tokyo by Nendo, in which colourful chocolate bars are displayed in clear drawers, and a Wonderwall-designed Godiva store in Harajuku, Japan, where melted chocolate appears to drip down the walls.

Photography is by Dean Kaufman.