A see-through chute carrying cacao nibs winds above the heads of customers in this São Paulo chocolate shop, which has been designed by Matheus Farah e Manoel Maia Arquitetura.

The shop is set inside the four-floor Dengo Factory on Avenida Brigadeiro Faria Lima, a major avenue in São Paulo that stretches through some of the city's most affluent neighbourhoods.

Local studio Matheus Farah e Manoel Maia Arquitetura was charged with its design, having been briefed by Dengo to create a destination that offered a more detailed insight into the world of the chocolate brand.

"The architecture sought to recreate a chocolate factory in an attractive and didactic way so it could highlight Dengo's differential: controlling every stage of the production process," the practice explained.

Measuring a total 1,500 square metres, the factory building comprises a series of stacked, rectilinear frames made from cross-laminated timber.

The frames are fronted by red aluminium beams and expansive panels of glazing, meaning that from arrival guests can look in and catch glimpses of Dengo products being crafted.

Inside on the ground floor, partitions walls have largely been omitted to make way for a see-through duct that snakes it way across the ceiling.

It shows cacao nibs being transported to a restored 1940s milling machine, which is displayed within a transparent case.

Upstairs on the first floor is the Meu Dengo, or "My Dengo", space that's anchored by a looping counter where people can stand and watch staff make personalised chocolate treats.

Customers can alternatively spend time at the cafe, ice cream bar, or the chocolate library up on the second floor.

Most surfaces throughout the store have been lined with wood so that the interior has the same warm brown hue as cacao beans.

The floor, meanwhile, has been inlaid with jagged shards of red ceramic tiles in a nod to one of Dengo's most popular products, Quebra-Quebra – flavoured slabs of chocolate that can be broken into fragments. 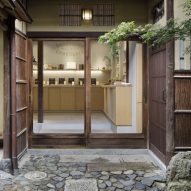 The studio purposefully kept the lighting dim throughout the store.

This mimics the conditions of cabrucas, an agricultural system used in northeastern Brazil where cacao is grown under the shade of forest trees.

Matheus Farah e Manoel Maia Arquitetura was established in 2017. The practice's Dengo chocolate store is shortlisted in this year's Dezeen Awards in the large retail interior category, going head-to-head against four other projects.

They include Box, a brightly hued package collection point in Helsinki, and the Sculptform showroom in Melbourne, which features a sequence of steam-bent timber tunnels.