Nendo's Nest shelves have the ability to double in width, allowing the user to select the appropriate size for their available space.

The studio, led by designer Oki Sato, described the product as: "A shelf that, from within, a second shelf of the same size seemingly grows outward."

Vertical partitions are made from 3.7-millimetre carbon fibre, while horizontal elements comprise a honeycomb material made from synthetic fibres that is sandwiched between carbon-fibre layers. All the surfaces are covered in a wooden larch veneer.

Carbon fibre is becoming an increasingly popular material for furniture design, due to its light weight relative to its high strength. Designers including Kris Lamba, Thomas Feichtner and Michael Sodeau have all recently used carbon fibre to create sculptural chairs. 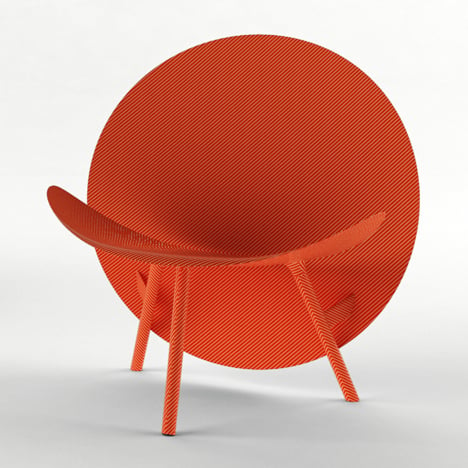 In the Nest shelves, the thinner expandable portion is hidden within the outer shelving layer, and assembled in a way that allows it to easily slide out when pulled.

Extending the unit takes it from 650 millimetres to 1,300 millimetres, revealing additional compartments for storing items.

"Extending the shelf halfway produces a grid shelf-style layout with rows of square shelves," said Nendo, which is one of the world's most prolific design studios. In an interview earlier this year, Sato told Dezeen that working on as many as 400 projects at once "relaxes" him.

Recent projects by the Tokyo-based office include chairs with interchangeable wooden tops and a library-like interior for a cosmetics store.

Nendo will present the shelving at Somerset House as part of the Ten Designers in the West Wing exhibition, which takes place from 21 to 27 September 2015 during this year's London Design Festival.

The exhibition will also showcase modular lighting designs by Luca Nichetto for Hem and a mobile phone by Jasper Morrison for Punkt.

Check out Dezeen's guide to the must-see exhibitions and installations around the city during the festival, which kicks off on 19 September.