Extra Moooi: running a successful design company is about striking a balance between order and chaos, says Robin Bevers in his first video interview since taking over as CEO of Dutch brand Moooi (+ movie).

Bevers took over as CEO of Moooi on 1 September after co-founder and CEO of 14 years Casper Vissers stepped down to pursue new business ventures.

Bevers says the key to his new role is managing the company efficiently, while giving freedom to designers to express their creativity.

"For somebody coming from the corporate side, it's quite challenging to work in the creative industry," he says in the movie, which was filmed at Moooi's Amsterdam showroom. "You don't want to stifle the designers – you want to give them space." 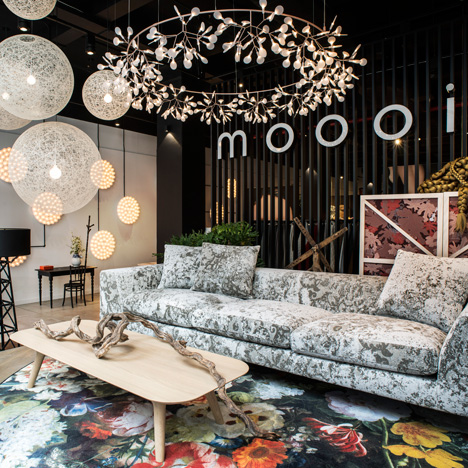 Designers "create chaos," he goes on to say. "But in a company you also need order. We tell everybody to embrace the polarity."

Bevers previously worked as managing director of Marcel Wanders Studio for ten years. In his new role he will continue to work closely with the Dutch designer, who is also creative director at Moooi.

"People often ask me: 'How do you keep a person like Marcel under control?'" Bevers says. "The answer is you don't, you really don't. You have to go with the flow. That's the essence of running a creative organisation."

Moooi made a name for itself by producing a range of striking products by designers such as Bertjan Pot, Maarten Baas, Studio Job and Wanders himself. It has since introduced minimal furniture and lighting designs to sit alongside the more exuberant pieces.

"Moooi started as a collection of iconic pieces and they moved into a full lifestyle collection, so there's so much potential," Bevers says. "That was really a challenge that I wanted to take."

Moooi expanded further this year, launching a new carpet company producing photorealistic, print-on-demand rugs as well as a collection of soaps and shampoos for hotels. In May, the brand also opened its first showroom outside Europe in New York.

"2015 has been an amazing year for Moooi," Bevers says. "I can't wait to see what the next years will bring."

This movie was filmed at Moooi's Amsterdam showroom. The music featured is a track called Aglow by US artist RyIm.

The movie is part of our year-long Extra Moooi collaboration, which sees us working with Moooi in Milan, New York, London and Amsterdam to get under the skin of the brand, its products and designers. Read all the stories at www.dezeen.com/moooi.