Available in four different editions – the birra, the IPA, the pint and the pils – each of the glasses has been designed with a specific beer in mind.

"Our Monti Taste collection celebrates the diversity and individuality of the craft beer," Sempli founder Daniele Semeraro told Dezeen. "We set out to design the ultimate beer glasses."

The glasses abandon the traditional rounded shape in favour of angular lines and conical inverted bases – designed to catch the first splash of a pour and help "lead the effervescence of the brew up to the surface". 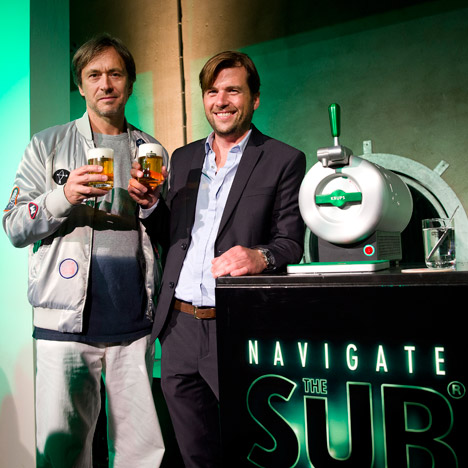 More carbonated pilsner beers are destined for the Monti-Pils glass, which the company claims helps the drink retains it fizziness for longer by making the drink's bubbles travel further in the taller glass.

The angular figure-of-eight-shaped Monti-IPA glass is designed to help to aerate ale by taking it on "a mini rollercoaster ride into the glass".

"The shape follows our no-nonsense approach to designing with only the necessary lines used when created the product," Semeraro said.

"When designing Sempli's products the straight lines are always the focal point of the design process, as we are always looking to contrast the fluidity of liquids with the angularity and strength that the lines represent," he added.

Each of the glasses has been mouth-blown from lead-free crystal, and is available as a single vessel or in a set of four.

"We did some deep and thorough R&D on these glasses and the main objective was to find the perfect fit in the hand while maintaining the desired tasting function," Semeraro said.

Sempli, which was founded by Swedish designer Daniel Semeraro in 2011, aims to unite the "simple functionality" of Swedish design with the "style and elegance" of Italy.

Stockholm studio Form Us With Love has also made the most of an increased interest in craft beer with an exhibition dedicated to the culture of making and drinking the alcoholic beverage, while Danish studio Norm Architects promised the perfect tipple with its battery-powered beer foamer.