London Design Festival 2015: designer Joel Hoff has partnered with design brand Wrong for Hay to launch a light that can be adjusted by rotating the base (+ movie).

The Turn On lamp features a globe-shaped bulb that rests atop a metallic cylindrical base available in a choice of four finishes: black, silver, red and green.

By turning the column-shaped base of the lamp – described by the brand as "effortlessly simple" – users can gradually adjust the brightness of the bulb, or turn the light off. 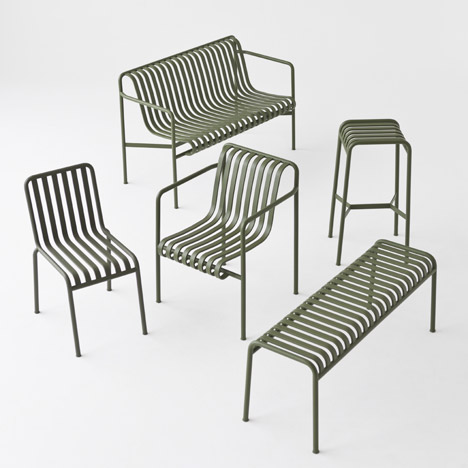 The design is a development of Hoff's Switch Light graduation project, which was the recipient of the Hay Talent Award in 2014.

Wrong for Hay is a collaboration between Danish furniture brand Hay and British designer Sebastian Wrong, which launched in 2013 and has since expanded with pieces by other designers.

The Turn On lamp is on display as part of a wider exhibition at designjunction, in which the brand's entire lighting collection is brought together for the first time in one place.

Also on show are designs by Lars Fjetland – who recently launched a self-extinguishing candle holder for the brand – SmithMatthias, Bertjan Pot and Stefan Diez.

The exhibition is on display until 27 September 2015 in the grand atrium space of designjunction's The College venue on Southampton Row, which is taking place as part of London Design Festival 2015.

"The idiosyncratic joy of London, the home of Wrong for Hay, is perfectly in evidence within the faded Victorian grandeur of the atrium space within The College building," the brand said in a statement.

"Vaulted ceilings and a glass dome roof provide the perfect setting for a celebratory exhibition of progressive and accessible design," they added.

The first 200 editions of the lamp will be available for visitors to purchase in the Wrong for Hay lighting kiosk in the space.