More than 40 designers have put their own spin on the iconic road signs – originally designed by Margaret Calvert and Jock Kinneir 50 years ago.

The designs were launched in 1965 as part of the duo's task to create visual harmony across Britain's road system, which was described by the exhibition's curators Made North as "one of the most ambitious and effective information design projects". Two new typefaces were also designed for use: Transport and Motorway.

For the Design Museum exhibition, the recognisable graphic shapes and typography have been reinterpreted with different colours, patterns and materials. 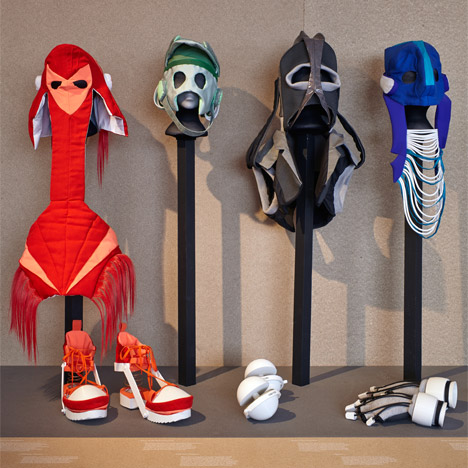 Mark Bonner has retained the recognisable layout of the motorway signs, while Jonathan Barnbrook has created a more chaotic, multi-layered and patterned design using Calvert and Kinneir's Transport typeface.

Asked if she had a favourite, Calvert told Dezeen: "A difficult choice, as I like them all. But if pressed, it would have to be Betty Jackson's elegant personalisation of the red triangle."

Calvert said that one of the biggest challenges of the project was "trying to convince a small section of the design community that capital and lowercase sans-serif letters, in transport, were far more effective than Kindersley's capitals-only alphabet".

When asked why the signs have come to occupy such a key place both in Britain's visual culture and designers' hearts, Calvert said: "Because they are familiar and serve a purpose".

"Although some of the ill-considered additions which appeared long after our involvement ended, in 1963, could do with a review — particularly regarding unnecessary clutter," she added.

The exhibition has been curated by Patrick Murphy, director at Made North – a design platform, gallery and conference in northern England. Alongside the display of other designers' work is a selection of the original signs, and a one-off version of the Road Works sign, created by Calvert for the exhibition.

The work is on show in the Design Museum's Tank and Riverside Hall as part of London Design Festival 2015, and will remain open until 25 October.

Also on display is the museum's 2015 Designers in Residence exhibition, which showcases the work of four designers responding to the theme of migration.