Foster + Partners has unveiled designs for a NASA Mars settlement for four astronauts that could be 3D printed by a team of semi-autonomous robots (+ slideshow).

Norman Foster's firm envisions a 93-square-metre habitat constructed from regolith, the loose soil and rocks found on the surface of the Red Planet.

The concept involves parachuting three different kinds of robot onto the surface of Mars: one that can dig a crater for building around, one that processes the regolith to create layered walls, and one that uses microwaves to fuse the material in place.

"The proposal considers multiple aspects of the project from delivery and deployment to construction and operations," said a statement from Foster + Partners, whose past projects include the world’s first space terminal for tourists.

"Given the vast distance from the earth and the ensuing communication delays, the deployment and construction is designed to take place with minimal human input, relying on rules and objectives rather than closely defined instructions," explained the firm.

"This makes the system more adaptive to change and unexpected challenges – a strong possibility for a mission of this scale."

Foster + Partners previously worked on designs for 3D-printed buildings on the moon. This latest project was initiated in response to the 3D Printed Habitat Challenge launched by NASA – the US space agency – and America Makes, which is the country's national additive-manufacturing innovation institute.

Working alongside industrial and academic partners under the collective title GAMMA, the Foster + Partners team is one of 30 shortlisted in the competition.

According to the proposal, the habitat would be delivered in two stages before the arrival of the astronauts.

First the semi-autonomous "diggers" would select a site and excavate a 1.5-metre-deep crater. For the second phase, the "transporters" and "melters" would use a process known as Regolith Additive Construction (RAC) to construct the buildings. 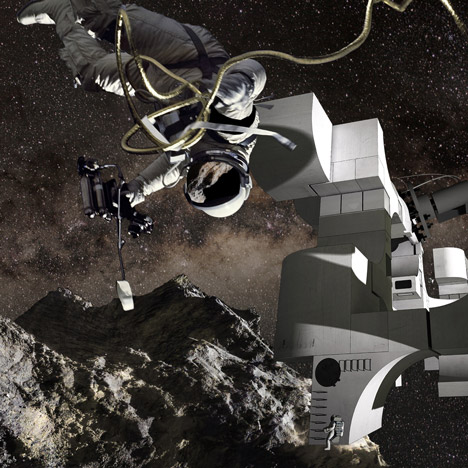 "The loose Martian soil is fused using microwaves around the modules using the same principles involved in 3D-printing," said the firm. "The fused regolith creates a permanent shield that protects the settlement from excessive radiation and extreme outside temperatures."

The concept involves using several robots for each task, so that if any fail or if a module becomes damaged, the problem can be rectified by another machine.

Inside, the various habitat modules overlapping private and communal spaces. The intention is for "soft materials" to be combined with virtual interfaces to create a comfortable and efficient living environment for the astronauts.

French 3D-printing company Fabulous responded to the brief with a bubble-shaped habitat, but was unable to submit its design as the competition was limited to the US.

More than 200,000 people from 140 countries applied for a one-way ticket to join a human settlement on Mars back in 2013, and earlier this year NASA began testing a drone that could scope out the terrain of the planet to find the best routes for explorative rover vehicles.