Feature: Los Angeles is turning into a "dystopia gone right" and is now the most interesting place in the USA for new architecture, according to international and local studios who are prospering from the city's combination of low rents and big projects.

The Broad in Downtown LA is one of this year's most anticipated buildings and opens today. But Diller Scofidio + Renfro's contemporary art museum is just the tip of the iceberg in terms of major new architecture and urban design projects in the city.

"LA is booming, and you have a lot of potential projects," said Dixon Lu, an associate partner at Ma Yansong's China-based architecture firm MAD. "It's very exciting being here. This has become the hottest destination."

"By being here you realise the creative power of Los Angeles," he told Dezeen. "People are excited about new firms and fresh ideas."

"It's an extremely exciting, vibrant, dynamic time," added local architect Michael Maltzan. "It feels to me that Los Angeles is becoming a cultural destination as much as it is a place to make culture from."

Maltzan quoted something he'd heard someone say recently: "San Francisco is a utopia gone wrong and LA is a dystopia gone right."

He added: "The unweildiness, the heterogeneity, the complexity here – all those things you might associate with dystopic urbanisms have made things like invention very possible. They’ve created a very open context."

The influx of talent and interesting projects is the result of a perfect storm: a revived economy, numerous development opportunities, relative affordability, and a sense of optimism about the city's cultural place and its possibilities for design innovation.

"The architecture community was hit hard with the economic downturn and what we are seeing now is the recovery, with reinvestment driven by the art world, a growing tech boom, public/private partnerships, and the mayor's office's interest in urbanism," said Mimi Zeiger, Dezeen columnist and West Coast editor of the Architect's Newspaper.

"Some really interesting international firms are starting to do work or set up shop, including Mexico City's Productora and FAR, which also has offices in Berlin and Chile."

MAD, which recently opened an office in Santa Monica, is planning its first US project in the city with 8600 Wilshire, an 18-unit residential complex in Beverly Hills consisting of glass villas with pitched roofs perched atop commercial space.

The Rem Koolhaas-led Dutch firm OMA has two new projects in LA – the Gathering Place at Wilshire Temple, a vaulted structure adjacent to the Moorish synagogue on Wilshire Boulevard, and the Plaza at Santa Monica, a mixed-use complex consisting of zig-zagging, block-length bars stepping up from the street.

A string of major projects are planned for Miracle Mile – the strip of Wilshire Boulevard that is home to many of LA's biggest arts institutions. Italian architect Renzo Piano has designed the Academy of Motion Picture Arts and Sciences, while Swiss architect Peter Zumthor is working on a controversial addition to the Los Angeles County Museum of Art. There's also wHY's conversion of a Masonic Temple into an art museum for Maurice and Paul Marciano, the founders of fashion brand Guess.

Local firms are also prospering. Maltzan has teamed up with Kansas City firm HNTB to plan an ambitious replacement of the 6th Street Viaduct over the Los Angeles River. Other projects in the Downtown area include the rehabilitation of Julia Morgan's Herald Examiner Building into office and restaurant space by emerging LA studio Omgivning, and British firm Grimshaw and local studio Gruen are working on a futuristic new master plan for Union Station, including new facilities for High Speed Rail.

Local resident Frank Gehry, while well into his 80s, is also more active than ever and for the first time is building extensively in his home city. He's developing 8150 Sunset Boulevard, a complex of five buildings on the Sunset Strip; the Grand, a $700 million (£450 million) series of mixed-use buildings in Downtown Los Angeles; the Ocean Avenue Project centred around a 22-story hotel tower overlooking the Pacific; and, of course, a masterplan to revive the LA River. 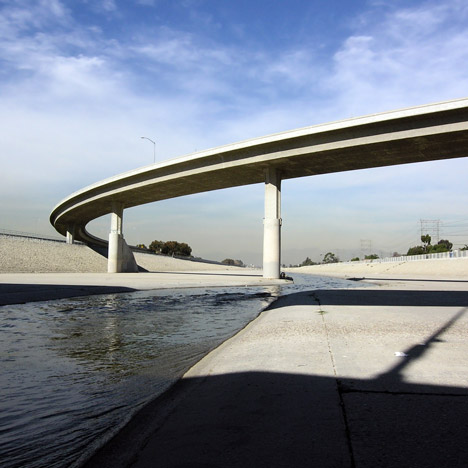 The scale of this architectural boom is hard to fathom in LA's sprawl, but a sense of its impact can already be gathered from recently completed and just-about-to-open projects including Maltzan's One Santa Fe, a combination of residential architecture and urbanism in the Arts District, KPF's re-skinning of the Petersen Automotive Museum, and SOM's Federal Courthouse, a glass cube that recently topped out in Downtown LA's Civic Center. And, of course, The Broad.

Architects, among the many creatives moving to Los Angeles, are being drawn to the city not just by the work, but by the city's well-known openness to the new plus relatively low rents.

"The Wild West is a silly trope, but there's something to it," said Diller Scofidio + Renfro associate principal Kevin Rice. "There's a willingness to allow for experimentation that you don't see as much on the East Coast."

Rohan Silva, former senior policy advisor to UK prime minister David Cameron and founder of creative workspace company Second Home, is among those who believe LA is the new destination for the US design scene. He has chosen the city over New York to open his company's first North American outpost.

"I think that there are three reasons why LA is really working right now," Silva told Dezeen in an interview earlier this year. "One is property prices. You can have space there. If you're an artist, you can have a big artist studio and a place to build."

"But I think there's two other reasons as well. One is that LA is a serious collection of neighbourhoods that are quite distinct. It's very walkable. It's quite European in a sense. And then the final reason that LA is coming to life right now is Uber. Because suddenly you don't need to drive to get around. You can jump in a car move across town pretty cheaply."

LA's design community — traditionally a home for transplants — has a reputation for being less closed than in many major cities. MAD's Lu explains that his firm, well-known in China but not in the US, was "immediately welcomed" upon arriving in Los Angeles. "We realised we made a good choice by coming here," he said.

Once regarded as insular, LA is now being viewed as a design destination.

"There's a shift going on," said Rice, who came to the city four years ago to work on The Broad. "It's not as all-encompassing as some think, but it's noticeable. There's a movement toward visual art and smaller scale cultural projects. You see it in the amount of work that's coming out of LA and the energy and the people from other places coming here."

Economic factors have also played a big role. The city is seeing a significant uptick in overall building projects. According to the Los Angeles Department of Building and Safety, the city's total construction spending is at its highest point in three decades, and its overall construction valuation, $6.8 billion (£4.4 billion), is up 30 per cent since just last year.

Much of that funding comes not from philanthropists like Eli Broad, but from foreign investors — particularly from Asia — and from the Northern California-based tech world.

"This is very much becoming a hub of activity between the larger North America and Asia," said Maltzan. "That I don’t think should be underestimated. The vibrancy in the economies in Asia are very directly related to Los Angeles."

Local officials have also made an effort to streamline the notoriously slow building process. According to the Department of Building and Safety, construction times have been cut by about a third through initiatives like parallel development, which allows a project to go through design, plan review, and construction at the same time.

"I want projects to come to LA instead of going to San Diego and San Francisco," said Raymond Chan, general manager of the Department of Building and Safety.

Chan notes that LA officials, community boards, and the public at large are demanding a higher caliber of architecture.

Ming Fung, a principal at Culver City-based Hodgetts + Fung, which is working on several new LA projects including a redevelopment of the iconic Norms Diner, adds that "people who matter" are becoming more sophisticated with regards to design.

"It's always a very slow learning curve, but it is coming," she said.

Fung is thrilled with the perception that Los Angeles is having an architectural "moment". "We need that kind of perception. It's a chance for people to recognise Los Angeles as a pretty important place and a repository for good architecture," she said.

"A moment implies something fleeting or unsustainable. Los Angeles has a long legacy of experimental architecture, this 'moment' is both consistent with that history and it is relatively new," added Zeiger. "People are looking at LA and seeing it for itself, not in comparison to New York or London."

Sam Lubell is a writer and journalist based in New York. He was formerly West Coast editor of the Archiect's Newspaper, and is a co-curator of the Shelter: Rethinking How We Live in Los Angeles exhibition at LA's A+D Museum.