London Design Festival 2015: London designer Oscar Diaz's Volume table mirror has a multi-angled base that allows it to be placed horizontally and vertically (+ slideshow).

The mirror is housed in a rectangular sand-cast aluminium frame with rounded edges, and is available in three colours: grey, green, and white.

A cross-shaped base extends from the back of the mirror, allowing it to be placed at four different angles that each tilt the surface of the mirror to different degrees. 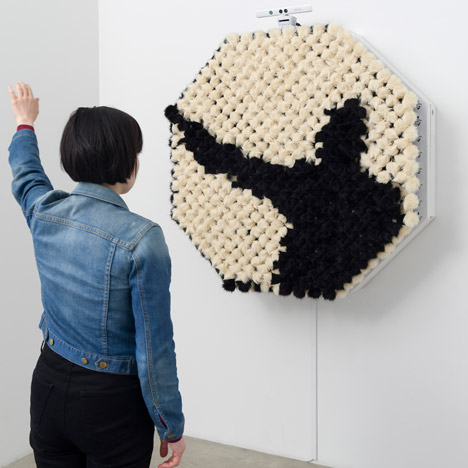 "I liked the idea of a small mirror that could be both handled or placed on a surface," Diaz told Dezeen. "I wanted it to work when placed on surfaces that you commonly find in a house at different heights, such as a side table, a mantelpiece or a shelf."

"We did more than 40 models to check the angles were right," he added. "The centre of gravity of the object changes when you turn it, so we needed to make sure it was stable and wouldn't fall back on any of the four positions. The weight also helped to achieve this."

The Volume mirror is on show at TokyoBike's Tabernacle Street shop, as part of London Design Festival 2015, which runs until 27 September.

Other unusual mirror designs include Studio Drift's looking glass constructed from byproducts made during the recycling of chemical waste.