Design and engineering sibling duo Gaspard and Lucas Tiné-Berès have created a prototype for a tricycle that allows riders to change direction by leaning to either side (+ movie).

The Cricket tricycle features a lightweight aluminium recumbent frame, which lets riders sit in a reclined position against a seat back that rests just in front of the vehicle's back wheel.

To power the vehicle, the user stretches their legs to the fore of the frame, where the pedals are housed between the two front wheels. 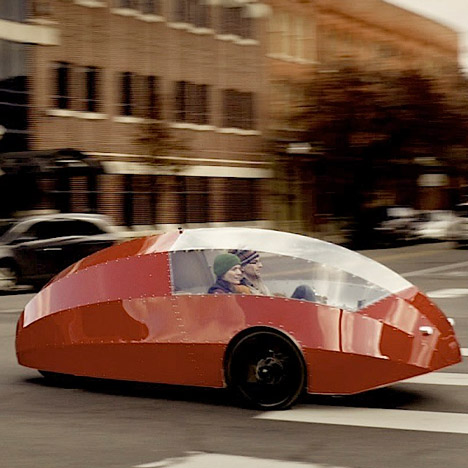 "Having experienced recumbent trikes, I was frustrated by the lack of strong sensations that you have, even when you would go really fast," Gaspard told Dezeen. "These types of bikes can go much faster than traditional ones."

A handle is attached to either side of the seat, and connected to each front wheel. By leaning and pulling or pushing on each of these, the rider's weight is enough to alter the direction of the trike. While travelling at low speeds, the handles can be used to turn more precisely.

"We imagined this new and unique way to steer by leaning, which gives you a sensation of almost surfing," Gaspard said. "Most of all you can drift, which is impossible with a normal recumbent trike."

The designer started working on the Cricket while studying at London's Royal College of Art, and spent three years developing it into a functional vehicle. The prototype has been produced by Daniel Hanart at Le Batard – a Parisian company that specialises in tailor-made bike frames.

"It's basically adding the advantage of recumbent bikes: ergonomic, fast, and very efficient – you can ride very long distances as the position is ideal – without losing the fun and the versatility of a racing bike," the designer added. "Both my brother and I are big fans of snowboarding and we think this is our city snowboard, or sledge."

Gaspard Tiné-Berès graduated from the RCA in 2012 and is a co-founder of Re-Do Studio. He has previously designed slippers made from a single piece of felt and a shoelace.

The designer also worked as part of a team to develop a concept for a modular engine that could fit into any vehicle at the Bio 50 biennial of design in Ljubljana.