Parisian office DGT Architects aimed to condense the architectural history of Japan's houses into a single home with this elevated timber volume supported on an earth-clad base.

The house sits in a 60-centimetre-deep pit in a neighbourhood in Oiso, a town located 40 miles south of Tokyo on Japan's eastern coast.

The four blocks around the base are coated in displaced soil from the site's excavation, while the upper storey is a timber-shingled volume reminiscent of an oversized shed.

French firm DGT Architects drew on the characteristics of ancient dwellings for the 122-square-metre family residence named A House for Oiso.

Looking at traces of construction in the area, dating from the Yayoi period (Japan's Iron Age) through to the Edo period between the 17th and 19th centuries, the architects found both subterranean and elevated homes – forming the basis of the house's two parts. 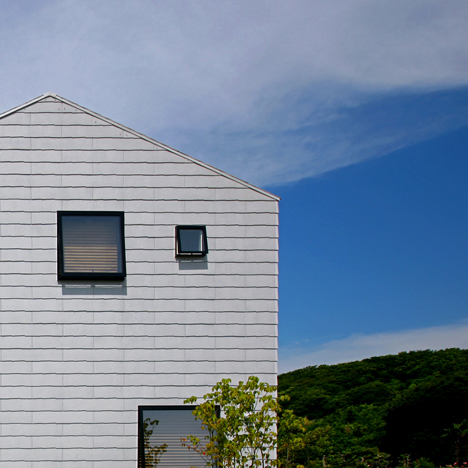 "Our client, who chose this place very specifically, said that they wanted us to design a house that would stand after 100 years," said the architects. "Then we got one idea: we want to design a 'Japanese House', which captures the essence of Japan from all ages."

"The people of Oiso experimented with many different forms of housing, such as pit-dwellings, raised-floor dwellings, dug-standing pillar buildings, machiya (traditional merchant houses), architecture of villas and so on," they added, explaining the different styles incorporated into the design.

The building's soil walls and sunken footprint help to keep the lower level of the building cool in summer and warm in winter. The timber-clad upper storey is ventilated by a long strip window overlooking the neighbourhood.

The shingled structure is completely lined in wood, which has been moulded to fit the pitched ceiling, while the lower floor features a raw concrete floor and white walls.

The upper floor appears to bridge a series of dispersed volumes on the lower level, but while similar designs – including a Tokyo dental practice and Sydney home – provide outdoor spaces for car-parking and sculpture parks in the gaps, in A House for Oiso they are glazed to create a central oblong-shaped living space.

The large panels of glass provide natural light inside the building, and the blocks are arranged to create a series of small courtyards around the periphery of the building that are planted with trees.

Each block serves a different function – one contains a traditional Japanese room, another houses the staircase and a bathroom and the smallest is occupied by the kitchen.

"The house is designed for a specific place," said the architects. "The building belongs not only to the site, but also to the past and to the surrounding land."