A dining table by Denmark's late Peder Moos has broken the world auction record for a piece of Nordic design, selling for over £600,000.

The one-off table was sold as part of London auction house Phillips' October design and Nordic design auctions, which resulted in a total of £5.2 million sales. Moos' dining table was designed in 1952 for the Villa Aubertin in Nakskov, Denmark, and features thin curved legs supported by wing-shaped braces. It achieved more than four times its pre-sale estimate, reaching £602,500 to surpass the world record.

Moos was trained as a cabinetmaker and later studied at Copenhagen's Royal Danish Academy of Fine Arts. Apart from a trolley and a coffee table manufactured by Fritz Hansen, he made all of his furniture himself. Moos' work – which was predominantly made in wood – has been exhibited in Stockholm, the Hague and New York's Museum of Modern Art (MoMA).

"In our Design and Nordic Design sales we saw a discerning market led by great connoisseurs and collectors, choosing works by established, mid-century designers," said Alexander Payne, head of design at Phillips.

Earlier this year, the auction house broke another world record – Australian designer Marc Newson's Lockheed Lounge kept its title as the world's most expensive design object after selling for more than £2 million. 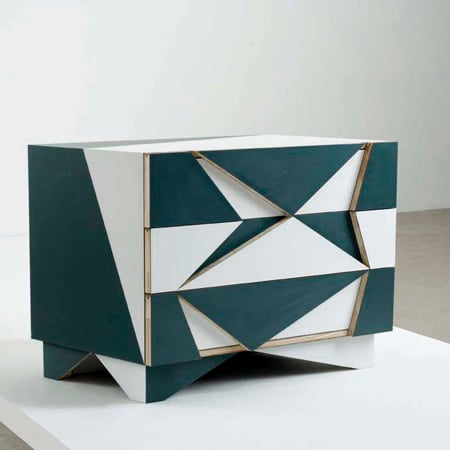 Phillips has also held auctions for furniture designed by Ross Lovegrove and a paper teahouse by architect Shigeru Ban.