Slatted timber shutters provide privacy and shade for this Tehran apartment block by local firm Ayeneh Office, and line up with its ridged granite facade (+ slideshow).

Andarzgoo Residential Building was designed by Ayeneh Office for a site near Andarzgoo Boulevard – a lively, upmarket area in the north of the Irani capital.

The block stands on a narrow alley near other buildings of varying heights and materials, so the architects in charge Ali Dehghani, Ali Soltani and Atefeh Karbasi chose to give it a simple, restrained exterior.

"The adjacent buildings have been chaotically constructed, so we created a neutral, formless facade to give the alley a calmer quality," they said. "Our strategy was primarily focused on the avoidance of a complex presentation."

The six-storey building has a small car park on the ground floor, and one apartment on each of the floors above. There is also a basement housing a gym, mechanical rooms and storage.

Local zoning rules prevented the architects from adding balconies at the front of the building, so they inserted deep glazed recesses into each apartment instead, which provide internal terraces, and bring light and ventilation into the living spaces.

"These transparent volumes can be used for storing plants, and can also be a nice place for sitting, smoking or barbecuing," the architects told Dezeen.

The five apartments each have an open-plan living space and dining area at the front, and three bedrooms and two bathrooms at the north-facing back, which are arranged in a C-shape around a void to ensure they get adequate daylight.

"We placed the private areas at the back, and the communal areas along the main facade, which faces south-west, to invite sunlight inside the main living space," explained the architects.

To block direct sunlight from the west, which hits the apartments in the afternoon, the architects added the timber shutters. These sit flush with the granite exterior when closed.

"We created a moveable wooden shell, with slats that are in perfect harmony with the ridged stone facade," they said.

Other buildings featured on Dezeen that take a similar approach to providing privacy and shade include a Vietnamese guesthouse covered in multicoloured shutters, and a São Paulo apartment block that can be opened up or closed down with folding perforated panels.

The shutters of Andarzgoo Residential Building are made from ThermoWood – a pine that has been heat-treated to improve its stability, making it suitable for the climate in Tehran, where average temperatures can range from one degree Celsius (33.8 degrees Fahrenheit) and 37 degrees Celsius (98.6 degrees Fahrenheit) throughout the year.

The architects used factory offcuts of granite for the building's facade, which were laid in strips of varying depths to create a ridged surface. 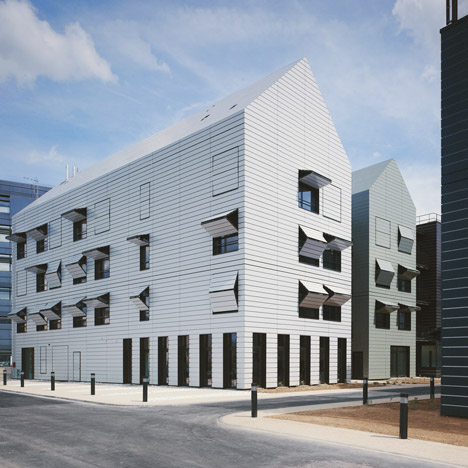 "We wanted the flat facade to have texture, so it didn't appear too uniform," they said. "In addition, using offcuts of granite allowed us to reduce the cost of the project by a little."

The ridged granite surface also continues inside on some walls to create a visual connection between the interior and the exterior.

The building was constructed with a steel frame and took one year to complete.

"Using a concrete structure would have made the building process longer. Moreover, steel allowed us to be more precise," said the architects.