An "elevated meadow" surrounds the glazed living space of this house in a Bulgarian village, which is raised above the fields on stone-filled cages to give it the appearance of an observation tower (+ slideshow).

The stone-filled cages, known as gabions, give the building hardy exterior. A glass pavilion-liked structure with a wide-brimmed roof rests on top, surrounded by a grassy deck that gives 360 degree views of the agricultural land that borders the village.

"The site of the project is distinguished both by its panoramic views and distant visibility," explained Jeliazkova, Katov and Apostolov, whose past projects include a house with a stepped verandah along one of its sloping glazed facades. 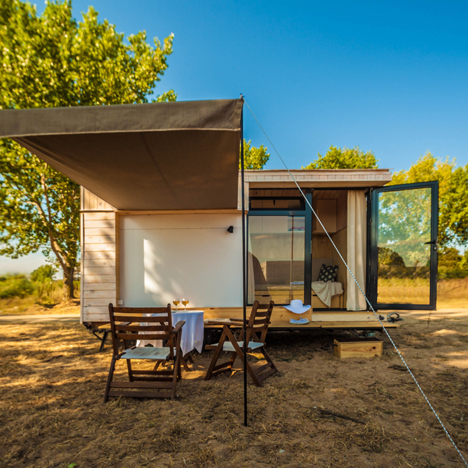 "In order to strengthen them, a part of the programme is located in the seemingly blind bastion-like volume and the living area is elevated high on it," they added. "This brings view completion up to 360 degree and privacy in the fully opened space above."

A single perforation in the gabion walls leads into a "cave-like" entrance hall and garage in the centre of the ground floor. A glass screen at the rear of this area aligns with the wall of the living space above, creating a tower-like column of glazing.

"The pitched roof geometrically connects the upper volume with the base and adds complexity in the interior space," said the architects, "while the oversized eaves connect it to the little meadow around and exaggerate the hovering effect of the slim metal structure."

"The proportion and the materiality of the solid base give it the appearance of an infrastructural object that define the edge of the village and conceal the ambitious program of the house."

A master bedroom, guest suite and staff quarters, as well as a sauna and massage room, are located around the periphery of this central glazed space.

Bedrooms are positioned along the glazed opening in the stone base to overlook a pool in the grounds of the house.

The smooth timber, glass and polished concrete surfaces within contrast the rugged texture of the exterior.

Two flights of pale wooden steps connect the ground floor areas with the open-plan living space and roof garden above.

"The materiality of the interior spaces is dominated by local species wood cladding, which balances the roughness of the entire structure and its surroundings," said the architects.

Other buildings featuring gabion walls include a gabled house in Poland by Kropka Studio and a villa in the Beskid Mountains by Zdeněk Trefil.

Photography is by Assen Emilov.