London designer Michael Anastassiades has continued his use of circular shapes and balanced elements in lighting designs to create a new lamp for Italian brand Flos.

Copycat consists of a large and a small sphere, which together create a stable position for a table lamp. "Two spheres just touch each other," Anastassiades said. "One small, in a precious material, placed under the 'shadow' of the large one, in illuminated glass."

The handblown glass globe holds a LED light source with a dimmer attached to the power cord. The smaller sphere is available plated in 24-carat gold, polished aluminium, copper or a black powder coating. 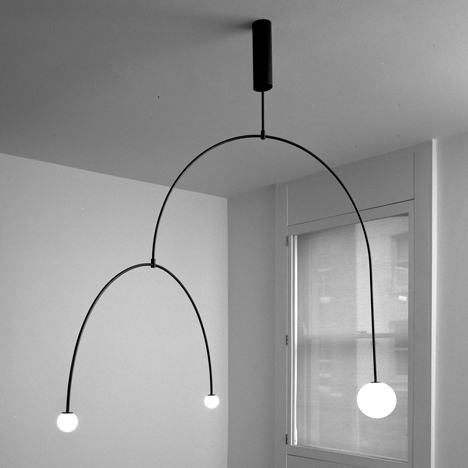 Pairing basic shapes such as spheres, cones and cylinders with slim bases or armatures, Anastassiades has been able to create a wide variety of fixtures.

"The idea is almost like an exercise in some sort of mathematical sequence, exploring how you position these things together," he said of the collection. "It's quite a playful way to address light."

Copycat was released during Milan design week in 2015, along with the Rest and Somewhere in the Middle lamps that also use glass globe forms set on small bars.

Anastassiades has collaborated with Flos on several different lines. He created the IC Lights family, which feature round globes attached to thin metal armatures, for the company in 2014.

His String Lights from 2013 use ultra-thin wires pulled taught against walls and ceilings to suspend spherical or conical lamps, while his Tip of the Tongue lamp used a round light element resting on the edge of a cylindrical brass base.