"I love Halloween, but I noticed that people's costumes tend to follow the same patterns every year," Tanabe told Dezeen.

"The average costume is store-bought, overpriced, and something recognisable from pop culture. And everything is sexy or dead – or both! I decided I would do the exact opposite of those things." 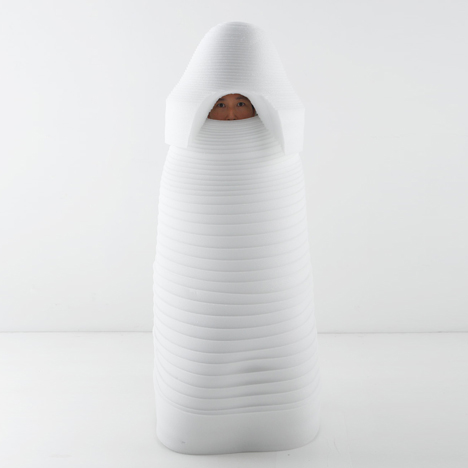 This year, he has used letter-shaped silver mylar balloons to create a futuristic inflatable disguise. An A, two Hs and four Y-shaped balloons form his Chrome Cloud costume.

The A balloon has been turned upside down to form a helmet, the Hs create arm coverings, and the Ys attach to the side of the body to create lobster-like inflatable claws.

"The costume reminds me of balloon sculptures by artist Jeff Koons, and the 'stuffed' look of some runway fashion by Comme des Garçons," he said. "Since my costumes are typically geometric, it was fun to try something softer."

In previous years, the designer has create a bright yellow high priest outfit, a his-and-hers set of hinged pink armour inspired by the winged protective gear worn by vikings, and an outfit that lamented the death of CDs and DVDs with a set of wearable disc-covered cubes.

"People often see my costumes as robotic, but I think of them as organic and belonging to nature," Tanabe said. 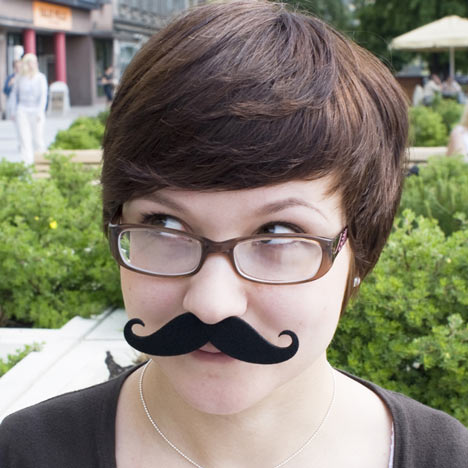 Tanabe's 2011 costume featured giant scoop-hands, which were "designed for rapid collection of tiny 'fun-sized' halloween candy", while his 2010 Orange Lantern outfit borrowed on the shapes of paper lanterns and the narratives found in Japanese ghost stories.

The designer often uses inexpensive, easily available materials – such as his 2004 costume which was built from hundreds of discarded videotapes attached to wearable cubes.

"I like shopping at places like Ikea and the hardware store," he said. "This year, I saw those silver balloons shaped like letters of the alphabet and thought 'I wonder if I could wear those?'."

One of the restrictions Tanabe places on his designs is that each costume costs around $40 or less, and the full details of materials used are listed alongside the images of his yearly outfits on his website.

"One big challenge is to keep things fresh every year," he told Dezeen. "Another challenge is to give the costumes structural integrity in addition to aesthetic value. People trained in graphic design, like myself, are often most creative when there are design constraints."