Brisbane studio Vokes and Peters has converted this timber holiday home in Queensland into a permanent residence for a semi-retired couple by adding an angular extension (+ slideshow).

Stuart Vokes and Aaron Peters, who recently formed their studio after parting company with former partner Paul Owen, added the small extension to provide a new kitchen and living room for the couple and their family.

The black timber structure, added to one side of the original house, features overhanging eaves and large windows that open onto its wooded setting on the Sunshine Coast, an area that stretches almost 40 miles along Australia's eastern seafront.

"Panorama Drive is a relatively small intervention to an existing timber house in the Sunshine Coast hinterland," said Vokes and Peters.

"The original timber house hovered disinterestedly above the site on timber stumps promoting distant views toward the eastern horizon, but maintaining little connection to the immediate surroundings." 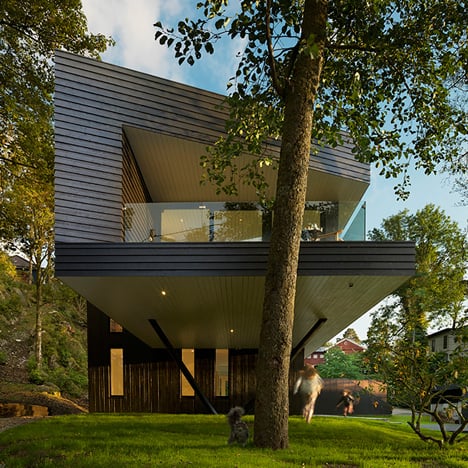 The black-painted timber is intended to minimise its visual presence, while its steeply pitched roofline and eaves were designed to reference the volcanic landscape. By following the contour of the terrain the architects hoped to improve the building's connection to the site.

"Its angular form and roofline were inspired by the dramatic terrain of the region: the coastal plain north of the Maroochy River is punctuated by massive volcanic forms rising out of the billiard-table-flat patchwork of cane fields," said the duo.

"The design is intended to evoke a sense of morphological elusiveness experienced when circumnavigating the base of these mountains; from one vantage a precipitous cliff, from another a gentle incline," they added. "Together with the pyramid form of the original house the new addition forms a miniature ridge line falling across the site."

The new combined kitchen and living space links to an L-shaped verandah that wraps two sides of the original house, allowing gatherings to overflow into the garden.

The positioning of the extension encloses one branch of the verandah to create a corridor through the centre of the plan.

A wooden breakfast bar runs across one of the kitchen's panoramic windows, giving casual diners views over a rockery into a row of palm trees.

"The re-instated verandah acts as a principal circulation spine and point of entry, but also creates a broad aperture through the centre of the plan, bringing views of the garden, light and air into the heart of the home," said Vokes and Peters. "The result is a more permeable and free-flowing arrangement of spaces."

Blackened timber is a popular cladding material for houses in Australia. In Melbourne, a house comprising angled volumes, a extension to an Edwardian property and a beachside home all use the material across their facades.