" Air Culture is an interdisciplinary project in between design and science; technology and nature," said Daher. "It is a starting point to question the value of air, and propose a more amplified vision of plants in a future scenario where their volatile emissions become part of our daily lives."

She suggests that the air could be "enriched" with these chemicals, which have a positive impact on both physical and psychological wellbeing, depending on the species used. "While researching those compounds I found out that most of them have high pharmaceutical value due to their chemical properties and an impact on our health," said Daher. "We usually harvest the plants to extract those compounds."

"Plants will start to synthesise those compounds under specific circumstances as a response to environmental stimuli," she added. "If the environment changes, plants' chemistry will also change."

The lab comprises a glass plant chamber, water pump and air pump, used to control the conditions surrounding the flora. The chamber is designed to harvest the air so it can be siphoned off and shared with people in bags.

She has also created a concept design for sharable capsules, that would be opened with glass pipe-shaped "air cutlery" and inhaled by the user.

"In the future we will taste and experience air the same way we already do with food and drinks," said Daher.

The designer chose to experiment with rosemary, after finding scientific studies that reveal some of its compounds could function as a "brain tonic" – sharpening mental acuity and increasing concentration.

Her system is intended to create the optimum conditions for the plant to release the specific compounds.

"Acknowledging plant's chemical vocabulary might not only change the way we relate to plants but also the way we perceive and consume air," she added. 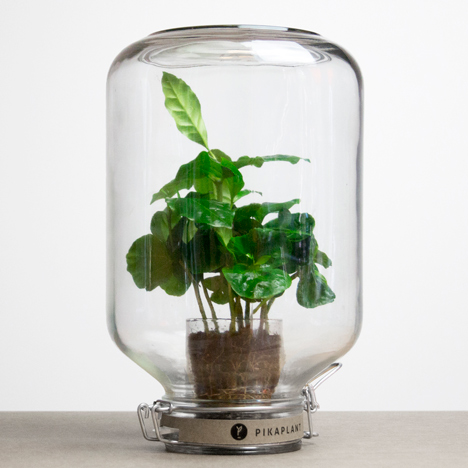 Although still in a conceptual phase, Daher hopes to deliver the idea on a larger scale, for example in public spaces and the infrastructure of buildings, which could use plant-technology systems to enhance inhabitants' wellbeing.

The project was on display at Design Academy Eindhoven as part of Dutch Design Week 2015, which ran from 17 to 25 October.

This year's graduates also presented a collection of electronics that only work in response to theatrical behaviour, digitally-created hybrid products, and alternative golfing outfits.

 Photography is by Siavash Maraghechi.