A traditional Japanese construction method was used for this house in Tokyo, which features four wooden columns arranged in a square to support the rest of the timber frame (+ slideshow).

The 4 Columns house is located 20 kilometres from central Tokyo, in a neighbourhood that was previously dominated by farmland and factories. The area has recently become popular with housing developers.

FT Architects – which has previously designed a photography studio with translucent plastic walls – chose to create a three-storey structure with a simple cubic form that extends to the boundaries of the site. This provides the largest area of floor space permitted on the plot.

The use of timber for the building's frame was determined by its low cost and regulations dictating the use of appropriate materials for minimising risks associated with earthquakes and fire.

"The chunky form gives a unique presence in its surroundings and a beautiful tense space is wrapped inside, where the inner and outer space is connected through a small yet beautiful light," said architect Katsuya Fukushima. 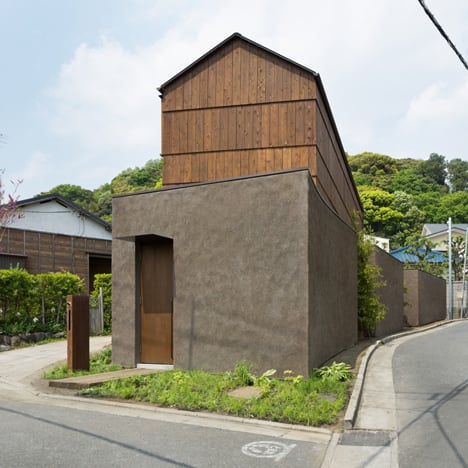 According to the architects, the home's interior aims to make the most of the available volume by providing a series of open, flexible spaces. The generous internal spaces are enabled by the use of a Yotsudate framework – an ancient building method featuring four supporting pillars.

"Four columns assembled like scaffolding constitute the structural frame," Fukushima added. "It is said to be the transitional form of the Japanese dwelling space from a pit dwelling to a medieval period dwelling."

The columns are arranged in a square at the centre of the building, which frees up the majority of the internal space.

Each column comprises four individual square posts grouped together. If required, moveable partition walls or fitted furniture can be fixed in place by slotting them into the gaps between the vertical posts.

Beams bolted to the columns are covered by thinner joists that support the floors of the upper levels. The bolts and screw used to connect the various elements are left visible to emphasise the building's simple construction.

Two of the columns extend from the earthen-floored office space on the ground floor to the bedroom situated beneath the sloping roof on the second storey.

A second pair of columns reach only as far as the open-plan kitchen, dining and lounge area on the first floor.

An area between two of the columns and one of the shorter elevations is dedicated to some of the building's services, including the staircase, bathroom and a storage space on the top floor.

Sliding glazed doors on each level open onto narrow balconies at the front of the house. White walls offset the warm tone of the wood used throughout the rooms and ensure the interior retains a bright feel.

Other timber-framed properties in Japan include a house raised above a busy road by a cantilevered concrete slab, and another with a cross-bracing cedar structure that is visible through a double-height glazed facade.