Belgian architects Edouard Brunet and François Martens have converted a terraced house in Brussels into two apartments, adding a projecting box with a full-height glass wall to house a new kitchen (+ slideshow).

The five-storey property in Brussels' Schaerbeek commune was previously occupied by a family but became too large for the owners' needs once their children moved out.

Brunet and Martens, who were collaborating on a project for the first time, were asked to separate the house into two flats so the owners could sell the lower portion of the building to a friend.

The main living area of the lower flat is located on the ground floor where it extends out towards the garden, while the upper apartment's living spaces are situated on the top storey to make the most of the light and views.

A section of the slanted roof above the east-facing rear elevation was removed and a staircase was shifted towards the centre of the building. This created space in the upper apartment for a new terrace and an extension to the kitchen that projects out four storeys above the ground. 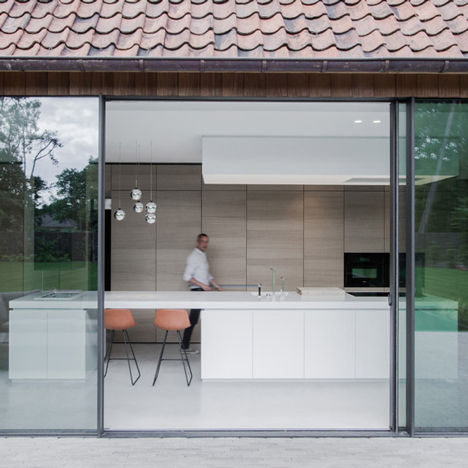 "The new space's style is purposely and visibly contemporary as well as uncluttered to distinguish it from the existing building," said the architects. "This frank intervention was made possible thanks to the existing rear facade's lack of cultural heritage interest and its relative poor state."

The addition of the terrace and extension provides the residents with views across the Brussels skyline and allows natural light to penetrate the interior throughout the day.

Full-height glazing wraps around the terrace to enhance the connection between the outdoor space and adjacent living area. Existing walls were removed to emphasise the openness of the room, and a mezzanine was added beneath the roof's apex.

The architects designed the apartment's main functional spaces as a single unit that extends across the two storeys.

"The kitchen, the staircase, the toilets and the shower are put together to compose this piece of furniture, which circulates between the floors and the rooms, allowing for fluidity and thus alleviating the small surface areas inconvenience," the architects added.

Birch cladding provides these spaces with a sense of uniformity that extends to a cubby hole containing the television. The wood was chosen for its warm tone.

Only small changes were made to the apartment that occupies the lower stories, including an overhaul of the existing bathroom and the introduction of fitted bamboo furniture and ironwork.

A new staircase separating the two apartments was required, so the architects collaborated with a metalworker to develop a slender folded metal structure that sits above a bamboo plinth.

Other recent projects in Brussels include an old industrial building converted into an open-plan apartment, and an aluminium-clad housing block funded and developed by its residents.