Product design company Native Union has developed a charging dock for the Apple Watch that combines a block of marble with a rotating metal mounting arm (+ slideshow).

Apple's smartwatch went on sale earlier this year, after being unveiled in the tech company's annual keynote in 2014. It was presented at a pavilion in Milan during April's design week, but has had a mixed response from designers.

"The Apple watch will probably revolutionise the wearable tech market," Native Union's head of design, Fabien Nauroy, told Dezeen. "It's not the first smart watch but no one in the past has managed to reach such a level of perfection in the integration of software and hardware."

"We are an Apple-centric company," he added. "Apple products are intentionally universal in their design, so our accessories are a way of making them individual to the user. Plus there is a big demand for accessories that are of a higher quality and refined design among Apple users."

Native Union has now revisited an earlier design for its DOCK charging station for the watch, replacing the weighted graphite and silicone base of the original with a chunk of solid black or white stone.

The product uses hand-polished marble to provide a support for a rotating aluminium arm around which the watch can be fastened. 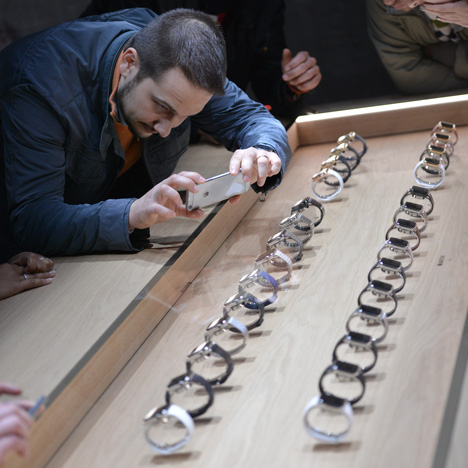 The materials were partly chosen for their weight, which helps prevent the stand from toppling over when the watch's touchscreen is used.

When combined with the watch's night mode, the stand also functions as a bedside alarm clock.

"The design team gets free rein to design and manufacture a concept that allows us to do something special, something that pushes the boundaries," said Nauroy. "The collection is always based on surprising materials, not typically used in the tech world."

"Our luxury tech line is always hard to make and always offers unique accessories. In 2015 the concept is marble tech. In 2016 it could be something totally different - that's up to the design department."

Marble has been in vogue amongst product designers for a couple of years, as evidenced by the recent release of products including Zaha Hadid's vases and tables with pleated marble surfaces, a collection of spherical candle holders that can be split in two and tables with mixed-and-matched marble tops.

Designer Bethan Gray told Dezeen that the material's popularity is down to the fact that "people are willing to make investments in high-quality natural materials," while London designer Lee Broom, who used marble to create a collection of lighting, claimed that "the emphasis has shifted from marble being a luxury material to simply being a natural material."

"We first had the idea of making a marble iPhone case after Maison et Objet in Paris two years ago," said Nauroy. "We thought marble's unique veins formed over thousands of years would be a great point of differentiation."

DOCK's aluminium arm is fixed to the marble block using a magnetic connection so no screws are required. The magnetic charging cable that comes with the watch is fed into the brushed metal cylinder, with the circular induction charging point slotting into a matching recess where it snaps to the rear of the watch.

The arm rotates so the watch's screen can be angled to make operation of apps easy while the device is charging. Turning the product over changes the side from which the rotating arm projects, which makes it comfortable for either left- or right-handed users to interact with the screen.

Native Union has already used marble in other accessories including a cover developed for Apple's iPhone 6 and a stand that accompanies an extra-long Apple Lightning charging cable.

"When we first approached stone suppliers they clearly thought we were crazy," said Nauroy. "It took us one year to develop new manufacturing processes to be able to cut the marble to less than 1mm, then add a layer of resin and fibreglass at the back to make the [iPhone] case lightweight and shatterproof."