Ukrainian studio AKZ Architectura completely covered the interior of this vegetarian cafe in Kyiv with white tiles and installed a "jungle" in the toilets (+ slideshow).

Situated on an old Kyiv street populated with Soviet-era buildings, AKZ Architectura – founded by Artem Vakhrin and Katya Zuieva – hoped to make the restaurant a "bright spot" in the area.

They developed a predominantly bright white design that would stand out when seen from the street through the cafe's small black-framed window and glazed door, but hid a cluster of green plants in the bathroom.

"The idea was to create a place that would show costumers the idea behind Orang+Utan bar," said the architects. "The city is a jungle and people who live there are smart animals, they need a place to refill energy."

White tiles were applied to the walls and ceilings using dark-coloured grout, and metal cages were suspended from the roof for storage.

"The older audience can see Ukraine's Soviet past in this tiled design," the architects told Dezeen. "The reason why it's happened is simple: in the former USSR there was only one type of tile for everything including hospitals, shops and pools." 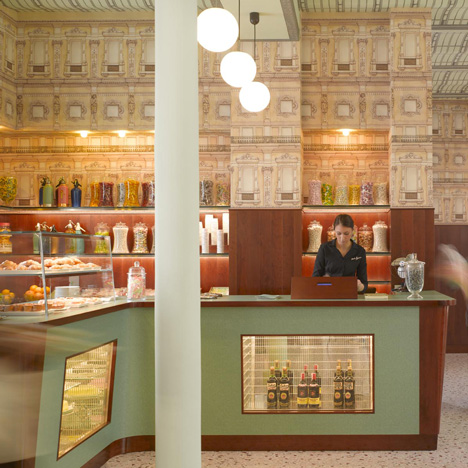 A single white table runs along the edge of the restaurant with tile-clad leg supports. It has enough space to seat 10 diners, with white metal-framed chairs. The name of the cafe is spelled out in white neon letters above the eating area.

Behind the tile-clad counter, the cafe's vegetarian menu has been applied to the wall in bold black lettering.

In the bathrooms, stainless-steel fixtures are paired with the tropical-looking plants and trees and displays of pink-painted fruits.

"We created a green zone to make customers feel like they are in a natural habitat," said the architects.