The company claims the cycle is the "world's lightest folding bike", weighing three kilograms less than its competitors – the equivalent of four pineapples, and less than the average watermelon.

The vehicle frame comprises a single arched bar made of carbon fibre, selected for its lightweight qualities. According to Hummingbird, the material is stronger than steel and absorbs vibrations, which makes for a "smoother ride".

The back wheel and handlebars of the bike fold under the frame, and the seat post can be lowered for carrying. The company claims the Hummingbird's mechanism also removes the possibility of the chain loosening – a recurring issue with similar folding bikes. 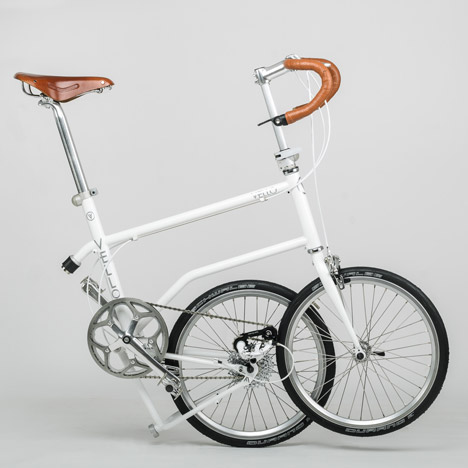 "There are quite a lot of designs that fold the wheel under the frame, but they all are offset either in front of behind the crankset," designer Peter Craciun told Dezeen.

"The Hummingbird has the pivot concentric to the crankset, thus the distance between the crankset and the wheel is always the same. This means that the chain is in tension throughout the fold," he added.

"With this system not only do we remove unnecesary weight, we also make the bike more user friendly and safe."

Craciun designed the first Hummingbird after becoming frustrated with the lack of affordable options for bikes that can be folded down to fit into elevators, or be easily carried upstairs.

Impossible Technology's electric bicycle folds away into a backpack

"I've always been obsessed with lightweight bikes, so I instantly knew I wanted to build the lightest folding bike out there," said the designer.

"Folding bikes on the market are also pretty complicated in the design, so when they are folded, they look like a mess," he added.

"I wanted to do something simple, different and bold."

The company is currently seeking £50,000 on Kickstarter to put the Hummingbird into production, and at the time of writing had already achieved half of its goal.

The bike will be available in red, yellow black and raw carbon fibre editions, and in single or five speed versions.

This video shows how light the folding bike is compared to other products, and how it is used

Canadian designer Peter Boutakis also claims to have invented the world's smallest folding bike, which can be reduced to the size of its wheels.

Meanwhile, an electric bike launched last year by Impossible Technology can be folded down small enough to be packed into a rucksack.