This courthouse in northern Palestine, which was commissioned by The United Nations, has chunky stone walls and an ornamental overlay of gold steel (+ slideshow).

AAU Anastas was commissioned to design the Toulkarem Courthouse by the United Nations Office for Project Services (UNOPS), a body that aims to support peace-building, humanitarian and development projects.

The architecture firm, which has offices in Palestine and Paris, designed two rectilinear buildings to house the courts on a triangular plot in the centre of the town of Toulkarem.

Their facades are made from a type of pale stone called sour ma'in, sourced from a quarry in the Hebron region. 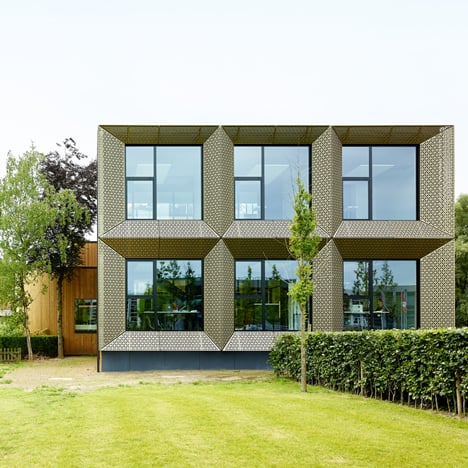 "The urban concept proposed determines a succession of volumes," he added. "A first building, at the top of the triangular parcel, accommodates public services while a second building unveils itself along with a locally cultivated interstice space."

The first of the four-storey buildings has deep-set windows surrounded by faceted frames. These are designed to cast shows on the glass, helping to protect the interior from harsh sunlight.

"The massive local stone walls of the main building are carved with different inclined geometries protecting the interior space from the greenhouse effect during working hours, while offering large framed views of the neighbouring landscapes," said Anastas.

This building sits at the top of a broad flight of steps and houses the court's administrative offices. The interior features bright white walls and large panels of glazing that are in direct opposition to the opaque shell.

"Its internal facades are, in contrast with the outer stone envelope, light and delicate, opened towards a cultivated linear space," said the architect.

This second building houses the magistrate courts and sits to the rear of the first.

It is covered in part by golden grilles with a geometric design. These decorative steel panels are based on Mashrabiya, a type of latticework more typically made from wood.

"Its facades are made out of a fine shimmering steel envelope, crossing notions of transparency and confidentiality," said Anastas. "It filters light and is permeable to the cultivated island of freshness."

The two buildings are separated by a narrow strip of planting but connected at the centre by a narrow passageway, giving the complex an H-shaped plan.

The courthouse was donated by Canada's Department of Foreign Affairs, Trade and Development.

Other court buildings with interesting designs include the headquarters for the International Criminal Court in the Hague by Schmidt Hammer Lassen Architects and the sunscreen-clad Salt Lake City courthouse by Thomas Phifer and Partners.

Photography is by Mikaela Burstow.