"Architecture is a field of repression," according to Polish-American architect Daniel Libeskind, who says that architects need to be more confrontational with their buildings.

The New York-based architect – who is behind the Ground Zero masterplan and the Jewish Museum in Berlin – believes it is vital that commemorative architecture reflects the brutality of atrocities rather than repressing it.

But he said that architects are often forced to conform their designs to fit expectations of what a building should offer.

"Architecture is a field of repression. You repress almost everything to produce a building. Everything is repressed because it has to fit into the context, it has to appeal to clients, it has to be normal," said Libeskind.

"I'm always surprised that people think that architecture should be comforting, should be nice, should appeal to your domesticity. Because the space and the world is different."

Daniel Libeskind made the comments during a discussion about memory at Roca London Gallery earlier this month.

The architect, who was born in Poland to holocaust-survivor parents, said he came up against criticism when working on the Jewish Museum Berlin as his plans for the building did not resemble a conventional museum. 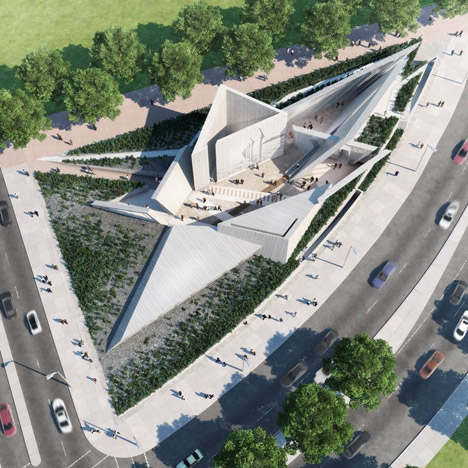 The museum opened in 2001, seeing Libeskind's first appointment come to fruition. It was the first in a series of memorials that the architect has designed since he opened his studio 26 years ago.

"If you forget your memory, have a trauma and you repress it, it's going to come to haunt you. It's going to do something to you, something bad, something violent at some point," said Libeskind.

"It's important not to repress the trauma, it's important to express it and sometimes the building is not something comforting," he added. "Why should it be comforting? You know, we shouldn't be comfortable in this world. I mean seeing what's going around."

The museum building famously has a sharp zigzagging plan, intersected by deep voids that bring light into the galleries.

Libeskind said he initially intended a portion of the building to be lightless because "nobody can bring light to a holocaust". But he changed his mind after reading an account from a holocaust survivor, who recalled a sliver of light shining through the grilles of a cattle car used to transport her to a concentration camp, and decided to add lightwells. 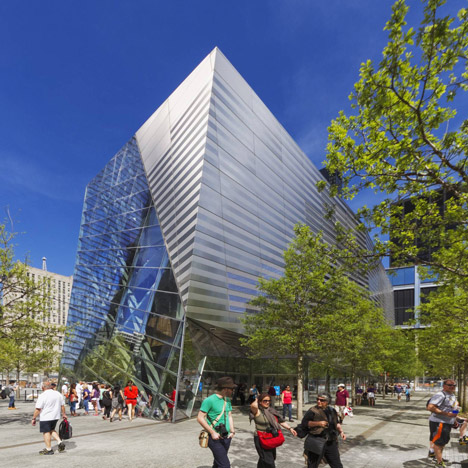 "In projects that deal with brutality architecture is not just an affirmation of what we already know," Libeskind told Dezeen after the talk. "A shift to something unknown, even repressed, initially perhaps might be feeling like something strange or discomforting but in the long run its incorporated as part of our space, as part of understanding of the world."

"The way to do it is by incorporating memory and not as a footnote but as a turbulent ground on which our world is based," he added. "And it is turbulent when you look at the news and all that's happening, all the events in this world, we can't just pretend that we're living in another era."

Libeskind applied this concept to the Ground Zero masterplan (2003), which he designed to mark the spot where the twin towers of New York's World Trade Centres once stood.

While an invitation to visit the base of the well created by the terrorist attack was rejected by the other architects in the running for the project, Libeskind said his acceptance led to his decision to memorialise the 9/11 bombings at ground level.

He gave over half of the 16-acre site to public space, including the sunken memorial and Davis Brody Bond's Memorial Museum, which opened in 2014. One World Trade Centre – a skyscraper designed by Skidmore, Owings & Merrill for the masterplan – completed at the beginning of 2015.

"I have to tell you when we walked down that ramp, 35 feet down and I touched that ground, my life changed," said Libeskind. "I understood that everything that I had been doing was completely nothing to do with it."

He also cites meeting the fathers of a fireman and of a flight attendant who were killed in the attack as having a key role in the design process.

"They unrolled a piece of paper and they said 'We have a map of all the body parts that were found'," he said. "You don't think about it, you don't want to think about it."

Daniel Libeskind is currently working on a pyramidal skyscraper in Jerusalem and the National Holocaust Monument in Canada – a building based on the Star of David. He has also been commissioned to design a peace memorial at the Maze prison in Northern Ireland.

The architect based his design for the Imperial War Museum North in England on an image of a shattered globe. The museum was completed in 2001 – the same year as the Jewish Museum Berlin – and is made from three interlocking fragments.