Dutch Design Week 2015: the way couples sit on each other's laps informed the shapes and two-toned upholstery in this collection of chairs by Dutch designer Annebet Philips.

Amsterdam-based Philips based her project on the word "loveseat", which originally described a type of furniture where two users sit facing parallel to one another but is now more commonly used to mean a two-seater sofa.

Taking this term as a literal starting point for the form of her design, Philips developed chairs that combine two parts upholstered in different colours.

"Like lovers, the Love Seat exists out of two parts that fit together by colour and shape, and cannot function without each other," the designer explained. 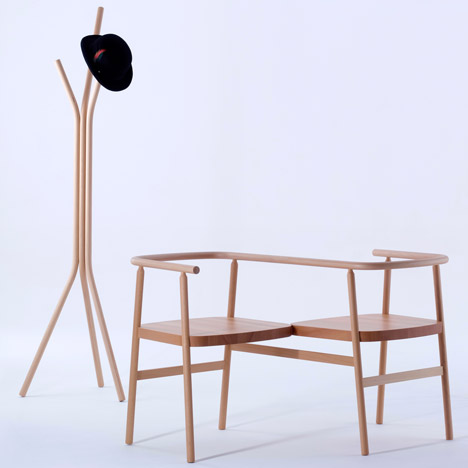 The collection, which comprises a chair, a low chair and a chaise longue, is produced by adding springs and a layer of foam to a wooden structure.

A knitted stretch textile from Dutch firm Febrik is then used to upholster the chairs, adding a padded surface to enhance the comfort of the seats.

"The quite simple shape of the chairs and the chunky seams, which show the outlines of the chairs as if they are drawn, emphasise the archetypal form of a chair," Philips told Dezeen. "In each chair the two parts are still recognisable."

The two pieces that form the Red/Blue chair can be separated and switched around so the user can position the armrest on whichever side they prefer.

Four pins on the underside of the upper seat slot into holes in the surface below, with a wingnut fixing the two parts together. This also makes it possible to offer a range of customisable colour combinations.

Philips studied Industrial Design Engineering at the Delft University of Technology and graduated in 2007 before setting up her Amsterdam studio in 2012.

She presented the chairs during Dutch Design Week in October 2015, and is currently seeking a manufacturer to help develop and put them into production.

Her previous products include a sofa carved from a single block of foam and cloaked in a loose cover which is printed to look like a sketched outline.