The three-bedroom property was designed by Melbourne studio Glow Design Group for a couple with one child and another due soon.

They asked for a contemporary, energy-efficient home that would make the most of its views across open farmland in the small town of Trentham, just over an hour's drive northwest of Melbourne.

"They did not so much have set plans in mind of what they wanted. They had a budget, and wanted to meet designers to see if they could click," explained architect Timothy Ellis of their first meeting.

"The main design inspiration was for the house to be a barn- or shed-like building, preferably of corrugated steel construction."

The architects named the project 700 Haus because of its location, 700 metres above sea level.

They covered some sections in blackbutt timber – a locally grown hardwood that is classified as bushfire-resistant – to soften the appearance of the corrugated steel. 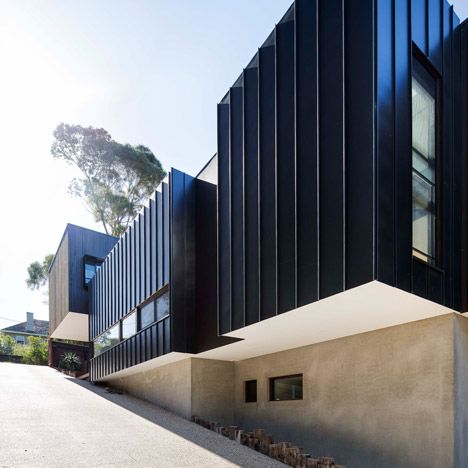 The timber was also used for the decking around the house, and 270 acacia trees were planted around the site to camouflage the house among its setting.

"With time, the house will blend in with its landscape," Ellis told Dezeen.

"The galvanised steel will lose its shine, the timber cladding will grey, and the many trees around the site will help the home feel more like a part of its setting."

Other recent houses with corrugated cladding include a house in New Jersey covered in white corrugated metal, and a Brooklyn townhouse built with off-the-shelf materials.

To ensure 700 Haus captured the best of its multiple views, which take in Mount Macedon to the east and rolling hills to the west, the architects logged photographs and information from their site visits on a computer to create a virtual walk-through of the location.

They used this to determine the building's orientation.

"The owners were amazed at how well the building matched the plan we had on the computer," said Ellis.

"We were able to match the axis to all these requirements and explore the house in three-dimensional walk-throughs, but to visit and get the same feeling, and have the windows line up as expected, was great."

The 253-square-metre single-storey house comprises two wings – one with a garage, mudroom and master bedroom suite, and the other with an open-plan kitchen, dining area, living room and playroom.

These are connected by a central section containing the main entrance, two children's bedrooms, a shared bathroom, and a corridor with large glass sliding doors.

"The corridor helps connect the house with its setting, with the large sliding doors offering views across the rolling plains," said Ellis. "On entering the house through the front door, you are immediately met with this view."

The open-plan kitchen, dining area and living room features blackbutt timber joinery, timber beams reclaimed from a school, and a fireplace built from local stone, which also opens up to the deck on the other side of the wall. 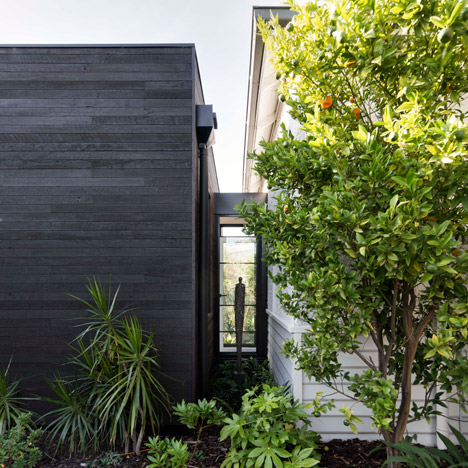 "Internally you are in a different space, with less of an industrial feel, and minimal use of steel. The timber gives the house a warmth in contrast to the exterior," said Ellis.

For the flooring, the architects used a polished concrete slab with glass pieces added to the aggregate when it was laid. Concrete was chosen for its ability to naturally absorb heat in the day and release it slowly in the evenings, helping to maintain an even temperature inside.

"This was important with such high ceilings in the room, and the cooler climate of this location, which is 700 metres above sea level," said Ellis.

In the bathroom, a skylight was added above the mirror, helping to bounce more light around the room.

"We wanted to get as much natural light as possible in the bathroom, and we were also informed that natural light is much better for applying make-up," said Ellis.

To minimise the need for heating in the cool climate, the house was designed with double-thickness walls, allowing for more insulation than normal.

On the sun-facing northern facade, the house also has a reverse brick veneer wall, which features bricks on the room-facing side to naturally soak up heat during the day and release it in the evenings, similar to the concrete flooring.

The house is designed to be self-sufficient for its energy and water needs.

The area has one of the highest levels of rainfall in the state of Victoria, which is channelled from the roof slopes to large tanks that provide all the family's water for drinking, washing and flushing. A shed will also be completed next year with solar photovoltaic panels to provide all the home's electricity.

Local materials were used where possible for the construction, which was completed in five months.