The practice winning-design was selected from a shortlist that included schemes by high-profile architecture firms including Steven Holl Architects, Mecanoo, and OMA.

The design features a pair of glass-encased cubic structures that house a museum, library and underground archive, arranged around a public plaza.

The museum will offer 15,000 square metres of space arranged across three levels, and includes a roof that extends 66 metres beyond the entrance of the building.

The library features a four-storey reading room with 1,000 desks, and a large overhead window that will bring in natural daylight.

The buildings will rest on a six-metre-tall stone base, contrasting with the matt glass exterior and also housing the underground archive. The facade will include a solid inner layer to prevent the sun from heating the building up.

Cascading terraces have been designed to help visitors navigate the building, and also offer views across the nearby plaza.

"The main concept behind the design was to create a space that brings together art, culture, and an urban environment – a space where people and culture are encouraged to interact," said the studio, which previously designed an art museum in Nanjing.

Shenzhen is in the south of China's Guangdong Province, which is home to 12 million inhabitants as well as electronics manufacturer Foxconn. The city is a member of UNESCO's Creative City Network – a collection of key cultural locations, established in 2004. 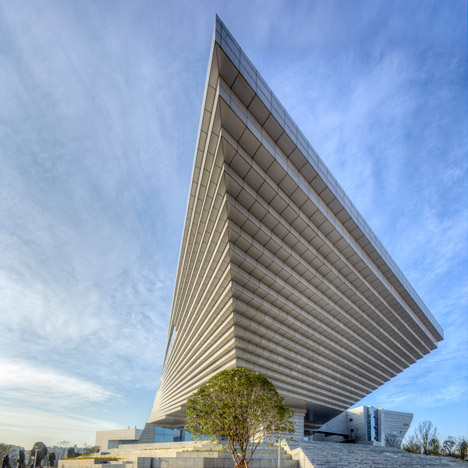 "In this context, the construction of the new art museum and library in the district of Longhua is not only of functional, but also of highly symbolic significance, representing as it does a firm example of how the strategy of also making Shenzhen a creative and cultural centre is actually being implemented," said the firm.

Another major new museum being built in the city has been designed by Pritzker Prize-winning architect Fumihiko Maki, and will feature three projecting volumes and a grand external staircase.

China is currently investing heavily in new cultural buildings and museums. Recent examples include a "floating" art and literary museum by American studio OLI Architecture, a tile-covered folk-art museum in Hangzhou by Kengo Kuma, and Jean Nouvel's National Museum of China, currently under construction in Beijing.